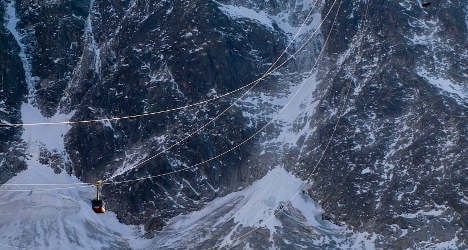 A cable car makes the 3,842-metre ascent to the summit of the Aiguille du Midi in the Mont Blanc massif. 251 tourists were stranded when its engine faile on May 14th. File photo: Tryfon Kar/Wikimedia

A group of tourists had a high-altitude fright on Tuesday when had to be rescued by helicopter from the Aiguille du midi cable car in the Mont Blanc massif in the French Alps.

At 10.40 am, the first carriage of the cable car had engine trouble, caught fire and broke down, leaving the 251 holiday-makers stranded for a time at 2,310 metres, Laurent Berger, from the Compagnie du Mont Blanc told French TV TF1.

“We weren’t capable of repairing the engine by the afternoon, so we decided to bring the remaining people back down in helicopters,” he added.

Over the course of the next two hours, two helicopters laid on by the Compagnie du Mont Blanc made 45 trips up and down the mountainside, and in the end successfully brought most of the tourists back to solid ground in Chamonix.

By late afternoon, the cable car was repaired, and the 80 remaining tourists could be brought back down to rejoin the group.

For his part, Berger insists that tourists shouldn’t have a second thought about visiting the panaromic, almost 4,000-metre summit of the Aiguille du Midi.

“Engine failures are extremely rare. The one that blew had been checked just three weeks ago,” he said.

The Aiguille du Midi cable car has a total length of 3,842 metres and performs a 2,700-metre ascent in 20 minutes, making it the highest cable car in Europe.