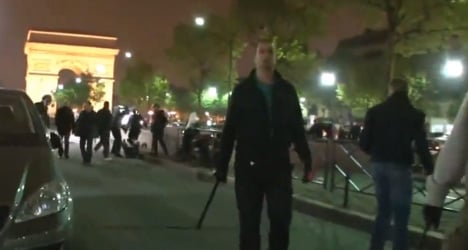 A plainclothes member of the CRS riot police (foreground) maintains order amid rioting and looting PSG supporters on the Champs Elysées on May 13th. Photo: Sevi C/Youtube

But the city's Tourism chiefs have moved quickly to quell fears that images of youths rampaging around the Eiffel Tower and the Champs Elysées will have a negative effect on the city's tourist industry, which is so vital for the region's economy..

The director of Paris’s office of tourism, Paul Roll has insisted that the rioting would have “no impact” on the frequency of tourist visits.

“Fortunately, these events have been very rare, and we shouldn’t treat them with significance that they don’t actually have,” he told RTL radio on Tuesday.

For his part, Guillaume Rascoussier, a hospitality sector expert, believes such incidents take place “in a very short time-frame.”

Another tourism expert, who preferred to remain nameless, also called for calm and perspective.

“These incidents won’t jeopardize tourism or hospitality businesses in the capital, because they are one-offs. And we can give assurances that there will not be the expected impact,” the expert added.

The Paris police prefecture said it was increasing the number of officers deployed at key sites including the Notre Dame Cathedral, the Louvre, the Champs Elysées shopping strip and the Montmartre district.

It will also begin distributing leaflets in heavily touristed areas, in English and French, warning against a trend that involves young criminals asking visitors to make donations to false charities or to sign false petitions, distracting them from pickpockets.

The shock violence which has reignited the debate occurred late on Monday after up to 15,000 PSG fans, who had thronged the esplanade at Trocadero by the iconic Eiffel Tower to mark the victory, turned unruly and attacked tourists and others in the heart of the city.

Smoke bombs were thrown, bars and restaurants were damaged and at least one tourist bus was attacked and a scooter burnt during an hours-long confrontation between an 800-strong police presence and hardline PSG supporters known as "ultras".

In all 32 people suffered injuries and 39 arrests were made following the disturbances, which even government ministers accepted had harmed France's image abroad.

"I travel the world telling people that France is a welcoming country, and attracting tourists. But these scandalous events give a terrible image of France," Foreign Minister Laurent Fabius said on RTL radio.

"Basically I am furious and disgusted like many people. We must be very firm, very hard with these hooligans," he added.

The riots have become the focus of a massive controversy in France this week, and taken on a political dimension. On Monday night, Paris deputy for the centre-right UMP, Claude Goasguen accused Interior Minister Manuel Valls of “amateurism” and “inertia” and led calls for his resignation.

UMP leader Jean-François Copé on Tuesday condemned Valls for not properly preparing for the incidents at Trocadero.

"Manuel Valls should have and could have foreseen this. He is incapable of exercising the authority of the state and preserving the safety of people and property," Copé told French daily Le Figaro, urging the minister to sack Paris police commissioner Bernard Boucault.

This week’s rioting is not the first time in recent months that grave concerns have been voiced about the reputation of Paris as a tourist-friendly city.

In March, The Local reported how French Tourism Minister Sylvia Pinel pledged to ensure the security of travellers, after 23 Chinese visitors were robbed of their cash and passports shortly after arriving in the capital.