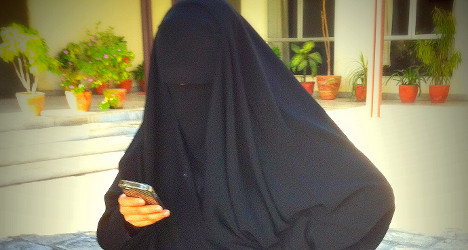 A 15-year-old, burqa-wearing Muslim convert fled her home in Mulhouse, near Strasbourg, to join her 28 year-old husband, whom she married 'over the phone.' File photo: Erict19/Flickr

The charges were brought after an investigation by police in the eastern French town of Mulhouse into a shady online scheme which put Muslim men in contact with young girls, who are newly-converted to Islam.

After being introduced, the men then ‘marry’ the young girls online and over the phone.

The scheme came to light earlier this month after a 15-year-old girl, whose father is British, ran away from home to live with an older Muslim man.

The girl had recently converted to Islam, along with three girlfriends, aged 17, 18 and 19, without her Christian parents' knowledge after frequenting social network internet sites.

Robin told regional daily Le Dauphiné Liberé that the teenager claimed to have married the 28-year-old “over the phone”  .

On May 6th, the girl’s father called police, alerting them to the fact that his daughter appeared to have run away.

Using a signal from the 28-year-old suspect’s mobile phone, police were able to geolocate him in Valence, 500km away in the Drome department of central France, along with his new teenage ‘wife.’

The girl, who told investigators this was her second marriage, after being denounced and rejected by her first husband, has since returned home to live with her parents in Mulhouse, while prosecutors carry out their investigation.

Her ‘husband’, himself a convert to Islam, has been remanded in custody in Mulhouse, a town 100 km from Strasbourg and next to the Swiss border.

Among the seven being held is a man from Moulins, central France, who is suspected of being the ringleader of the scheme.

COVID-19
EU approves use of Pfizer-BioNTech vaccine in children 12 and over in Europe
Url copied to clipboard!