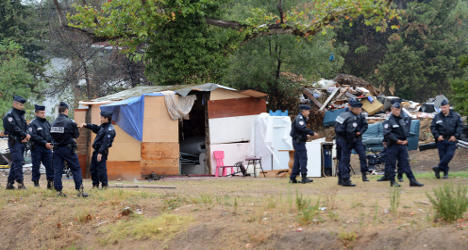 File photo of another Roma camp beofre it was dismantled by French police. Photo: AFP

At least three people, including a child, died in France overnight after a blaze engulfed an abandoned factory that was housing nearly 300 Roma squatters in the southeastern city of Lyon, officials said on Monday.

Up to seven people in all could have perished in the fire, which began shortly after midnight and completely destroyed the building on Rue Audibert et Lavirotte in the 8th arrondissement of the city, fire fighters and police said.

Officials said two women and a child were confirmed dead.

Local human rights activists said the building was mostly used by women and children, who slept in the attic.

Scores of survivors were rescued and were being housed in the gymnasium of a local school on Monday.

Police dogs have been brought in to help in the search for possible survivors, however the operation has been hampered by the fact the building is in danger of collapse.

The French government has come under fire in recent months for its continued policy of dismantling the Roma camps and expelling the occupants back to their home countries in eastern Europe.

The government claims the conditions in these camps are dangerous and unsanitary where as critics argue alternative accommodation needs to be found before the squats are pulled down.