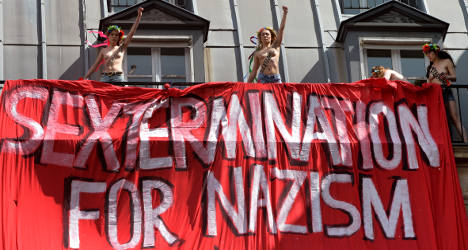 Topless protesters from the feminist group Femen staged their latest provocative protest in Paris on Sunday, when they targeted a march by supporters of the French far-right.

The group, who last year disguised themselves as nuns to infiltrate a anti-gay marriage protest, goaded hundreds of marchers who were commemorating the feast day of the saint Joan of Arc, who has become a symbol of the far-right in France.

As hardline Catholics, royalists and skin heads, were paying homage at the Joan of Arc statue in Place des Pyramides four topless members of Femen crept out onto a balcony overlooking the crowds.

To the anger and surprise of those below the feminists unfurled giant banners, which read “Sextermination to Nazism” and “Neofeminism is watching you”.

Femen then set of flairs and raised their clenched fists in a now typical salute.

Naturally this did not go down to well with those peering up from the street below. Shouts of “Femen sluts” and “Femen on the stake” were soon heard.

French riot police who had been following the march quickly moved in to prevent any trouble and were soon greeted with angry chants of “police accomplice!” from the far right groups.

After half an hour of goading the marchers the four women were removed from the balcony and taken from the building via a back door and then whisked away from the scene.

Femen are no strangers to controversy, earlier this year bid their own farewell to Pope Benedict by staging a topless protest inside Notre Dame Cathedral in Paris.