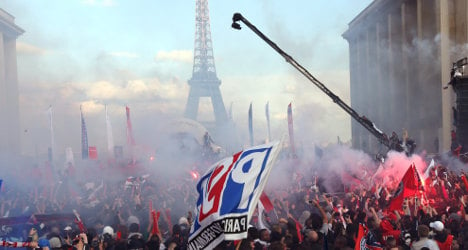 PSG's celebrations after being crowned champions of Ligue 1 had to be cut short on Monday after fans clashed with riot police.

There were ugly scenes at Place Trocadero near the Eiffel Tower where thousands of fans had gathered to greet their victorious team.

The celebrations turned sour when fans, believed to be a group of ultras who were banned from the stadium, turned up and began throwing missiles at riot police and stewards.

"It was the fault of the ultras, we couldn't celebrate because of them," one fan told AFP.

Another, Alexandre, said: "The festival was ruined."

A police source reported: "There were numerous smoke bombs and objects thrown at the players' podium, and a strong surge by the crowd when the players got onto the podium.

"Police officers reinforced security around the podium which resulted in objects being thrown at the security forces."

Fans also took to Twitter to condemn the rioters.

One fan writing "Unbelievable. They have destroyed the Champs (Elysées) for football.

Another tweeted: "PSG shamed by these rioters who have stained the image of the most beautiful city in the world."

Officers responded with tear gas but could not gain control forcing PSG's players and club bosses to cut short the celebration ceremony.

There were reports of several injured fans being taken to hospital.

PSG's players were supposed to spend the night partying on a cruise boat on the river Seine but it was cancelled as trouble continued into the night.

French TV showed images of fans smashing the windows of designer stores in the nearby area like Louis Vuitton. There were also images of supermarkets being ransacked and bus stops and burned out bus stops and cars.

TV coverage captured fans being carried away on stretchers by first aid crews.

At one point fans appeared to rob the luggage compartment of a tourist bus which was obviously caught in the wrong place at the wrong time.

A spokesman for the police Alliance union told BFMTV that the forces of order had underestimated the potential for violence and had did not have enough officers on the streets.

The images which will be beamed around the world will do impress PSG's Qatari owners who are desperate to improve the club's global image.

The Paris club has a longstanding hooligan problem which has seen rival fan groups clashing basis on a regular before and after matches.