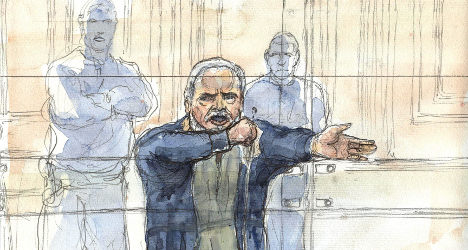 A court sketch made on November 8, 2011 in Paris, shows Venezuelan militant cell leader Carlos the Jackal (C) at Paris courthouse during his trial. Photo: Benoit Peyrucq/AFP

Carlos the Jackal, once considered one of the world's most wanted terrorists, returned to court in Paris on Monday to appeal his conviction for a series of deadly bombings in France 30 years ago.

The trial kicked off with Carlos, whose real name is Ilich Ramirez Sanchez, appearing without his defence lawyers and saying he had asked them not to attend.

The 63-year-old, who has been imprisoned in France since his capture in Sudan in 1994, was found guilty in 2011 of masterminding the 1982 and 1983 attacks on two French passenger trains, a train station in Marseille and a Libyan magazine office in Paris.

Already serving life for murder at the time, Carlos was given another life sentence for his role in attacks that left 11 people dead and nearly 150 injured, earning him the mantle of the world's most wanted fugitive.

The 1982-83 bombings in France were widely believed to have been carried out to avenge France's detention of two fellow members of a militant group Carlos ran with the support of East Germany's notorious secret police, the Stasi.

Prosecutors in France had struggled to secure a conviction until the release of secret Stasi files in the years that followed the collapse of Communism and German reunification.

At the heart of Carlos's appeal will be a claim that the evidence garnered from these files is fundamentally unreliable.

"I have forbidden my lawyers from coming to defend me," Carlos told the court as the trial began, saying he had asked them not to attend because Venezuelan authorities would not agree to cover his court costs.

"I have nothing against the court… I have no intention of sabotaging the trial," he said, asking for court-appointed defence lawyers.

But he earned a quick reprimand from the judge when two young lawyers entered the courtroom to defend him, saying "A blonde and a brunette?"

The panel of judges that will hear the appeal will also review the acquittal of Christa Froehlich, a 70-year-old German, of charges of involvement in one of the attacks.

Froehlich was tried in absentia in 2011 and has informed the court she will not be attending the appeal, which is scheduled to run until the end of June.

At his first trial, Carlos denied any involvement in the 1982-83 bombings while issuing a series of ambiguous pronouncements about his role as a "professional revolutionary" waging a war for the liberation of Palestine and other causes.

In numerous interviews he has given over the years, he has claimed responsibility for or involvement in dozens of attacks in which hundreds of people have died.

After years on the run from Western security services, he was finally arrested in Sudan in 1994 and transferred to France, where he was convicted three years later of the 1975 murder in Paris of two members of the French security services and an alleged informer.

He could yet face a third trial in France as an examining magistrate is still investigating a 1974 bombing in the centre of Paris that left two people dead and 34 injured.

Carlos has spent several years in solitary confinement but his prison conditions in France have, of late, been much more comfortable.

At the Centrale de Poissy in the western suburbs of Paris, he spends his time reading, taking philosophy and literature classes and talking with his many visitors, according to one of his lawyers, Francis Vuillemin.

"It is similar to the life of a monk in an abbey," Vuillemin said.

According to Aude Simeon, a former teacher in the prison, the monk's life also includes access to cigars and Venezuelan coffee served in his cell. 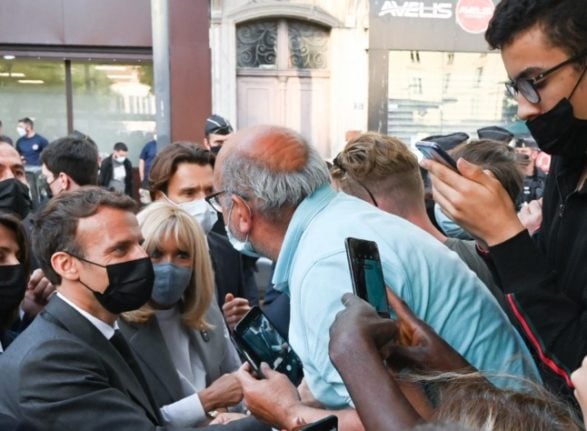 POLITICS
Four months in jail for Frenchman who slapped Macron across the face
Url copied to clipboard!