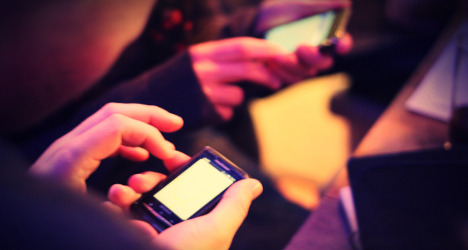 Is France about to tax smartphones such as these? The Lescure report on May 13th calls for funding French culture by taxing giants like Apple, Google and Amazon. File photo: Phil Campbell

France has a reputation for being tax-happy, and a report on Monday will do little to change that impression.

This time, consumers in France could be looking at even further increases in the cost of smartphones and tablets like iPhones, Androids and Kindles, if the government adopts the advice given in the long-awaited report.

The nine-member panel, headed by respected journalist and businessman Pierre Lescure, said in the  report that the revenue gained from the proposed new taxes could help fund artistic and creative ventures.

The report is set to be handed to French President François Hollande on Monday, and will contain a number of proposals regarding French culture and digital policy.

Chief among them, a suggestion to “call upon the makers and distributors of online devices” to pay a new tax, with the purpose of funding French “cultural content,” such as movies, TV and music.

The report – parts of which were leaked to the French press – will argue that French consumers have become accustomed to getting their culture for free online, according to French TV TF1.

Therefore, it should fall on multinational giants like Google, Apple and Amazon – who make the smartphones and tablets that increasingly transmit videos, music, and movies – to play their part in financing the future of French cinema, music and TV.

Since the 1980s, film distributors and cinemas, TV channels and more recently, internet service providers, have been required in France to contribute part of their earnings to fund the creation of French movies, music and television.

However, with the advent of online streaming and internet piracy, French consumers have balked at buying DVDs and CDs, and traditional distributors have taken a severe financial hit.

As French daily Le Figaro points out, while the average French consumer will refuse to pay €9 for a music CD, preferring to download the music illegally, they will not hesitate to pay ever-increasing prices for the newest iPhone or Kindle.

With the cost of smartphones and tablets already so high, then, a tax on the likes of Google and Apple – resulting in a price hike for Androids and iPhones – would appear more acceptable to consumers, and is therefore a more viable plan to fund French cinema and music into the future.

Lescure has also set his sights on reforming the much criticised "Hadopi" law against illegal downloading. Lescure is in favour of France's Higher Council for Audiovisual media (CSA) which regulates electronic media in France taking over the job of cracking down on fraudsters.

Currently authorities have the right to cut off the internet connection to those caught illegally downloading, but Lescure wants to end this practice, believing it too draconian.

But the report said that demands for compensation from Google by content providers such as newspapers – which say the search giant makes significant advertising revenue from referencing their material – were legally "doubtful".

France and Germany are considering imposing compensation schemes on Google as the company has refused to reach any deal with media outlets.