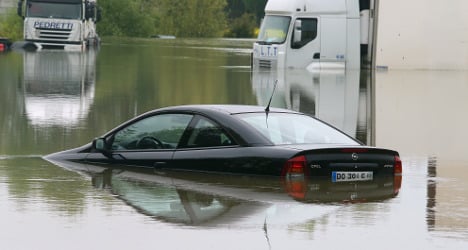 A car and other vehicles float in a flooded carpark at Buchères, next to Troyes, on the Seine river, on May 7th. Photo: François Nascimbeni/AFP

The historic town of Troyes, 170 km upstream from the French capital, was hit by flooding on Thursday which caused damage to local properties and businesses.

In response, the town’s UMP deputy mayor François Baroin has called on the French government to declare a natural disaster in the worst-affected parts of the Aube department.

The cost of the damage caused by the floods is not yet known.

The entire Aube department remained on orange alert for flooding on Friday morning (the second-highest threat level), according to the most recent warnings issued by Meteo France, the national meteorological service.

After significant rainfall and widespread flooding of the upstream sections of the Seine river– around Troyes, Méry-sur-Seine, Nogent-sur-Seine – there has been a stabilization of flood levels there, which meant relief for residents in the affected areas.

Pointing to a rock part submerged in the river Frederick Fey, from the village of Saint-Julien-les-Villas said: "This stone is a landmark that I peered at anxiously for two days. Since Tuesday, I have hardly slept. Me and my wife took turns to check the level of the water and were ready to evacuate. We are happy that it is over. "

The most recent evaluations also showed a yellow threat level of flooding for sections of the Marne river, at Chalons-en-Champagne, and upstream parts of the Aube river – at Blaincourt-sur-Aube.

There had been fears that the Seine could burst its banks in Paris, and allow river levels were high on Thursday the French capital escaped any serious flooding. Authorities did have to close the highways by the side of the Seine to traffic as water levels rose.