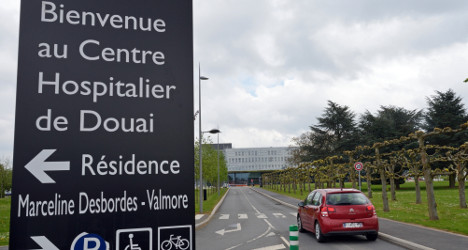 A car drives in front of the hospital where a 65-year-old man has been diagnosed with deadly SARS-like virus. Authorities believe the virus may have spread. Photo: Denis Charlet/AFP

French health authorities feared the country's first case of a new SARS-like virus that has killed 18 people, mostly in Saudi Arabia,  may have infected three other people.

On Friday morning authorities said they had detected a third suspected case of the virus, just a day after announcing two other people had been hospitalized after showing symptoms of the disease.

“We have a third suspected case this morning, a nurse from Douai” in northern France, the deputy director of the regional ARS health agency, Sandrine Segovia Kueny, told France Bleu Nord radio.

A 65-year-old man who came back to France from a holiday in Dubai was diagnosed with the deadly novel coronavirus, and is in intensive care in a hospital in the northern city of Douai, the health ministry said on Wednesday.

“This is the first and only confirmed case in France to date,” it added.

But on Thursday the health authorities in the Nord/Pas-de-Calais region said two more people were undergoing tests after showing symptoms of the virus.

They were a man who had shared a room in hospital with the patient, and a doctor who treated him.

The unnamed patient, who was in Dubai from April 9th to 17th, has been placed in isolation and is being given respiratory assistance and blood transfusions.

The virus, known as nCoV-EMC, is a cousin of Severe Acute Respiratory Syndrome (SARS), which triggered a scare ten years ago when it erupted in east Asia, leaping to humans from animal hosts and killing some 800 people.

Medical experts however played down the significance of two new people being contaminated.

Yazdan Yazdanpanah, head of the infectious diseases department at the Bichat Hospital in Paris, told Europe1 radio the two possible new cases do not mean that other people will be infected.

“If the number of secondary cases were to multiply, we should worry because it would mean that the virus is mutating. But for now, these two cases do not absolutely mean that we are witnessing a significant spread of this virus,” he said.

The new virus was first detected in September 2012 and since then more than 30 cases have been reported in different countries, with 18 deaths. But the French health ministry says it does not appear to be very contagious.