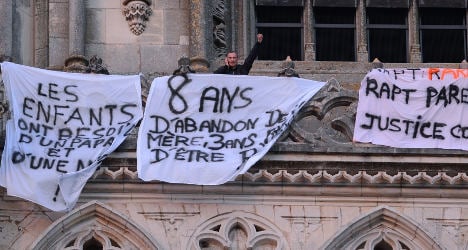 One of the group Stephane Joly (centre) raises his fist next to banners on May 9, 2013 on a terrace on top of the cathedral in Orleans, western France.Photo:Alan Jocard/AFP

The four were part of an initial group of nine protesters, who had set up camp on Thursday and unfurled banners from the roof reading "Children need a dad and a mom" and "Parental abduction, justice is accomplice".

Five of the men, however, came back down a short while later.

But the four who remain do not appear likely to end their protest anytime soon.

“We are determined to stay up here,” Frederic Foroughi, told AFP by telephone. “We have put up a tent on the terrace, we have duvets and something to eat.

“We took turns in sleeping, two at a time,” said Foroughi, who claims he can only see his daughter every other weekend.

“The group are demanding “shared parenting” and that “a child’s right to have both their parents is recognized by the courts”.

The protesters, who come from all over France, including Brittany and Alsace Lorraine, were on a tour of the cathedral that they themselves had organized when they surprised officials by setting up camp on the terrace.

Explaining the motivation behind their extreme course of action Jean Le Bail, another member of the group said: “One year after a couple separates, there are 30 percent of children who only see the parent to whom they were entrusted.

“And in 80 percent of these cases it is the father who is excluded from the lives of the children.”

The group’s action is reminiscent of that taken by Serge Charnay, a 42-year-old aggrieved father who spent four days perched on top of a crane in the city of Nantes in protest at being denied access to his son.

In the end, France's Prime Minister Jean-Marc Ayrault asked ministers to meet fathers' rights groups in Paris to try and bring an end to Charnay’s action.

RIGHTS
How long can Brits stay in the UK without losing their EU residency?
Url copied to clipboard!