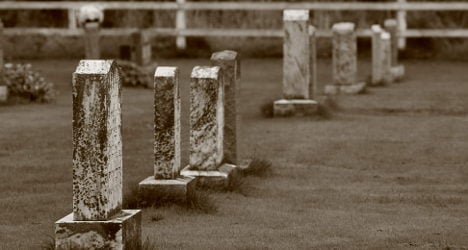 With France struggling to pay off its public debt and the government embroiled in an offshore tax evasion scandal, the country's fiscal authorities might be forgiven for being a little more thorough than usual in reclaiming revenue these days.

But surely chasing a man to his grave is taking things a little too far? That, however, is exactly what the notorious French taxman has done, French media reported on Tuesday.

After attempting to send a tax bill to the unnamed taxpayer’s home, in the Ile-de-France region surrounding Paris, last month, the Centre for Public Finances had the letter returned to them, marked “Deceased” – a status the man had had for months.

Undeterred by this detail, it seems someone at the tax office in Vincennes, just outside the French capital, tracked down the man to his final resting place – a cemetery in Autheuil in the Lower Normandy region of north-western France.

To ensure there would be no mistake in delivering the letter on this occasion, the address on the envelope was even marked, “Tomb 19”.

Astonished, the postman on duty that day seems to have decided on a better destination for the letter – the local mayor’s office.

After receiving the dead man’s tax bill, Autheuil mayor Béatrice Devedjian told RTL radio: “I was a bit shocked. It can’t be that we’ve reached the point where we’re harassing people in their final resting place.”

Currently in possession of the infamous letter, Devedjian is trying to trace the family of the deceased man, in order to forward them the bill, according to French daily Le Figaro.