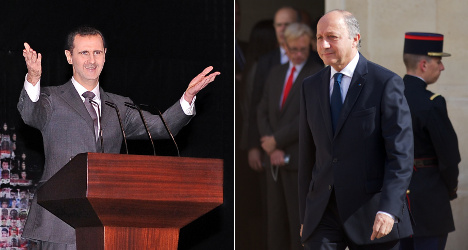 France called for a "political solution" to the conflict in Syria after the country's regime was suspected of using chemical weapons following two Israeli raids on the country.

The Syrian government warned that the regional situation was "more dangerous" following the raid as fears grew of a spillover of the conflict.

"The situation in Syria is a real tragedy," Fabius told a press conference, adding that if it continued, it could be a "human and political disaster".

"Obviously it's something that one can understand, but at the same time, it's a risk," he said of the raids. "If the conflict extends to neighbouring countries, it would be a turning point in its nature."

On Sunday British foreign minister William Hague said the Israeli air strikes showed that peace in the region was under threat, and reinforced the need to lift an arms embargo on Syrian rebels.

On chemical weapons, Fabius said the United States, Britain, France and Canada have "hints" that they were used by the Syrian regime, and would further investigate whether there was proof.

"Many of us have said that if it was demonstrated that there has been use of chemical weapons it's a game-changer," Fabius said.

US President Barack Obama has refused to rule out any options, but has said he did not foresee deploying US troops if Assad's regime is proved to have used chemical weapons.