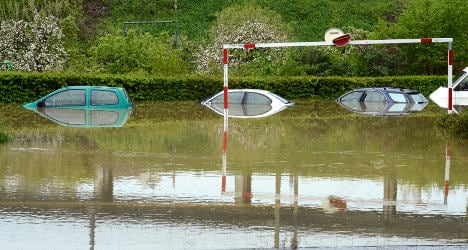 The flooded city of Dijon on Saturday. Photo: Philippe Desmazes/AFP

The north-eastern departments of Yonne, Marne and Haute-Marne have been placed under orange alert – the second highest threat level – by France’s meteorological service Metéo France.

French daily Le Parisien reports that water levels are expected to rise throughout the afternoon and this evening.

By Monday afternoon, water levels were predicted to rise by 40cm from Monday morning's levels in Joigny and by as much as 60-90cm by this evening in Sens, in the Burgundy region.

The Yonne river and its two tributaries, the Armançon and the Serein, continued to rise throughout Monday.

In a statement, police in the department of Yonne said they would remain vigilant, conducting surveillance of the affected zones and increasing security, particularly among residents living below ground level.

Showers are also expected in the east and south of the department, the statement continued, but should not have any effect on the level of the flooding.

Meanwhile, the nearby Ile-de-France region is expected to remain in the clear, with only minor risks of flooding.

The latest warnings come after a week of torrential rain and flooding.

On Saturday, areas of eastern France were evacuated after torrential rain hit the Burgundy region. The city of Dijon was among the worst affected, with residents ordered to leave their homes to escape the approaching flood waters from the Ouche river.

On Sunday at least 80 houses in 40 communes surrounding the districts of Tonnerre and Chablis in Burgundy were flooded, in what has been considered the worst flooding since 2001.

On May 2nd, a nine-year-old boy was swept away in a swollen river in Drôme, in south-eastern France and on May 1st part of a bridge collapsed over the Isère river due to heavy rain and increased water levels cause by melting snow.