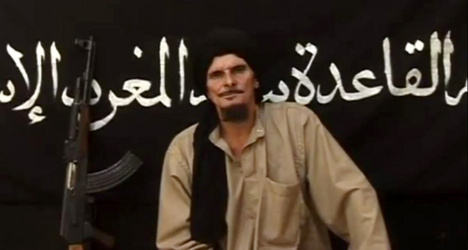 French Islamist Gilles Le Guen, known as Abdel Jelil, delivers a videotaped warning to France, the US and UN in October 2012, before a French-led military intervention in Mali. Photo: Sahara Media/AFP

A French Islamist arrested in northern Mali has been transferred to the capital Bamako, where he will be handed over to the military, a Malian army spokesman said on Monday.

Gilles Le Guen, 58, who goes by the name Abdel Jelil, was arrested by French forces near Timbuktu a week ago before being taken for questioning in Mali's northeastern city of Gao.

"The French jihadist was transferred to northern Bamako and he is with the (French) Operation Serval forces who will hand him over to the Malian army," Modibo Naman Traore told AFP.

"It is up to the Malian army to start proceedings to extradite him to France."

The Frenchman is believed to have joined the north African militant organisation Al-Qaeda in the Islamic Maghreb (AQIM) after moving to Mali with his family following previous stints living in Morocco and Mauritania.

In October, Le Guen appeared in Islamic dress with a gun at his side in a video on a Mauritanian website in which he warned France, the United States and the United Nations against military intervention in Mali to drive Islamists from the country's vast desert north.

France went on to launch and lead an operation in January to halt an advance by extremists on Bamako and drive them from Mali's northern cities, which they had controlled for about nine months.

Le Guen was held prisoner by AQIM for several days in November 2012 and some sources say the group believed he was a spy while others say AQIM picked him up after he intervened to stop Islamists from mistreating women.