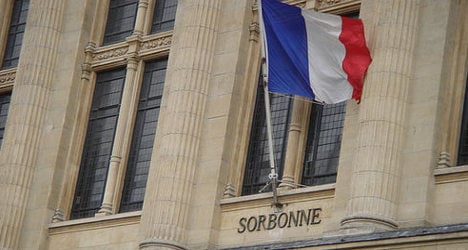 France's most famous university, the Sorbonne.

France’s Minister for Higher Education, Geneviève Fioraso, provoked anger among a group of writers, as well as the famous protectors of the French language the Académie Française earlier this year when she announced plans to permit university courses to be taught entirely in English.

Fioraso wants to change the famous Toubon law – which states that the French must be the language of all teaching – a move that would enable universities to attract more students from across the globe.

However on Friday Fioraso suggested that the controversial proposals had been watered down and that now only one percent of courses will be taught in English.

“This is not about making foreign language courses obligatory at universities, but allowing them to do so in a specific framework geared towards a targeted audience,” Fioraso said.

The minister also said it would remain obligatory for foreign students to take French courses and their grades would count towards their final diploma score.

Although some private universities and the elite Grandes Écoles already offer courses in English, officially they are breaking the law by doing so.

The government wants to bring the level of foreign students from 12 percent to 15 percent at French institutions, whose reputation, according to a recent report, has suffered on a global scale. They believe courses in English hold the key.

Many academics, including Jean-Loup Salzmann, president of the Conference of University Presidents are in favour. "English has become the international Language no matter what the pessimists think," he said.

However many disagree with the minister's plans.

“This one percent figure was just pulled out of a hat to try and settle the controversy and it once again shows how unprepared the government is,” a student told French daily Le Figaro.

French author Frederic Werst is staunchly against Fioraso’s plan, telling the Local recently that it was deluded.

The proposals are set to be discussed in the French parliament later this month.