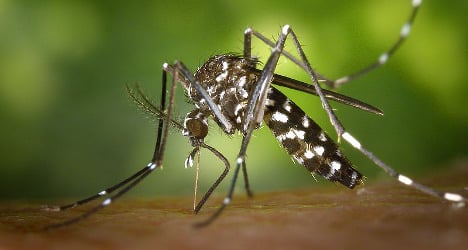 Aedes albopictus - the 'tiger mosquito.' French authorities have launched their annual war on the fast-breeding, disease-carrying insects, which are prevalent in the south of France. Photo: CDC

As spring and early summer bring warmer weather, all over France t-shirts and shorts are being taken out of the closet again.

Unfortunately, however, early May is also the start of mosquito season, and all that bare flesh is irresistible to one Aedes albopictus – the tiger mosquito.

Which means its time for officials from France’s ministry of health to launch their annual war on the tiny Asian bloodsuckers on Thursday, warning residents in the south of the country to be vigilant and take simple steps to avoid infestation by a creature that lays 250 eggs every two days.

“It’s important to get rid of stagnant water around the house,” the Direction générale de la santé (Directorate General for Health) said in a statement.

Tiger mosquitos have now made home in 17 departments in the south of France, according to French daily Le Parisien. That’s a number that went up from just nine in last year.

Especially virulent along the humid Mediterranean coast, the tiger mosquito first appeared in the Alpes-Maritimes department in 2004.

Since then, the insects have spread from there and caused serious infections such as Denge and Chikungunya fever, notably in the Provence-Alpes-Côte d’Azur region during the summer of 2010.

This isn’t the first time in recent weeks that French authorities have declared war on disease-carrying pests.

Last month, The Local reported how Paris police had kicked off their yearly “deratization” campaign, hoping to keep homes in the French capital free of the city’s millions of infectious rodents.