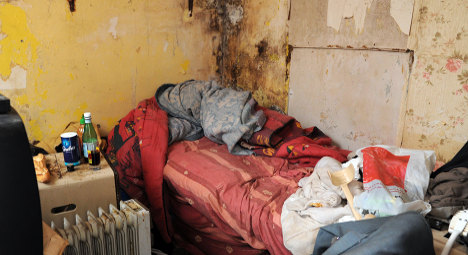 A picture taken on March 28th, 2013 shows an insalubrious room, which was rented for €200 per month in Soisson, north-eastern France. Photo: Alain Julian

The court heard how the bar owner rented dirty rooms to vulnerable people in the backyard of his establishment in the town of Soissons, in the Aisne department of north-eastern France.

The rooms, some of which had no windows, had a festering stench, no water points and unsafe electric wiring.

The prosecution told the court the landlord had "played with the dignity of the tenants".

The six tenants, aged between 40 and 77 years-old, were only allowed to use an “unsanitary” toilet in the garden. Some of them were disabled and all were all living on the breadline.

Despite the undignified living conditions, the landlord was charging them €200 a month in rent, that had to be paid in cash.

“They were all there voluntarily and they never once wanted to leave,” the unscrupulous landlord told the court.

French daily Le Parisien reported that once police started investigating, the tenants were reluctant to lodge complaints, claiming they were better off living there than out on the street.

As well as being slapped with a prison sentence, the landlord was handed a €5,000 fine and told to pay €1,000 compensation to the victims.

Speaking after the trial, the landlord’s lawyer defended his client.

“He has always been there for those people who, if it weren't for him, would be living on the street,” said Michel Lefevre-Franquet.