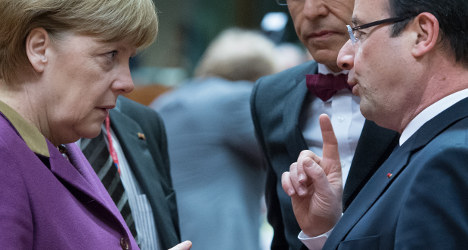 Will François Hollande apologise on behalf of his party members for their recent German-bashing? Photo: Bertrand Langlois/AFP

Two of Chancellor Angela Merkel's most prominent opponents have urged France's ruling Socialists to call a halt to the "German-bashing" that has soured the two countries' partnership.

Ties between the nations, whose post-war reconciliation has driven European integration, sunk to a new low this weekend after France's Socialists accused Merkel of "selfish intransigence" in her response to the eurozone debt crisis, in a leaked party document.

Euro MP Daniel Cohn-Bendit, a German Green and fervent critic of Merkel, said the Socialists were making the Chancellor a scapegoat for their own failure to win the debate in Europe over the balance between austerity and measures to promote growth.

"Instead of pointing the finger at Mrs Merkel and ascribing her powers that she doesn't have, the French Socialists should look to their own failures to create a European project and find allies to support it," Cohn-Bendit told Europe 1 radio.

"They've tried to absolve themselves with Merkel-bashing and Germany-bashing. That's not going to change policy at the European level. The whole Socialists' approach has been bad."

"Blaming Angela Merkel for all the problems of Europe, I find that unfair. Around the table in Brussels, there are 26 other leaders, not just Angela Merkel.

"It is well known that I'm a Social Democrat, so I'm no supporter of Merkel, but she can't be held responsible for everything that goes wrong in Europe."