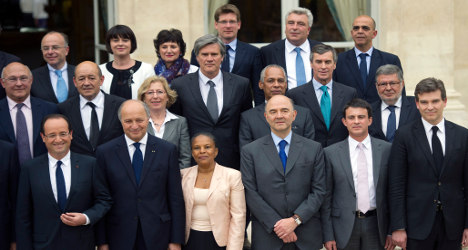 France’s government ministries are failing to do enough to fight racism and discrimination and in some cases they are making matters worse, a new report suggested on Monday.

The study, which was carried out by the think tank “Republic and Diversity” with the cooperation of various rights groups, scored each ministry on its efforts made to fight racial discrimination over the last year.

Ministries were also judged on whether they had implemented policies promised by President François Hollande in his election manifesto.

The average score handed out was a meager three out of ten, or as a teacher might put it in an end-of-year report: “Poor, could do a lot better”.

When it comes to fighting against racism, France’s Interior Ministry, perhaps predictably given its mandate, was given the lowest rating.

The Interior Ministry led by Manuel Valls, who has been dubbed the “Sarkozy of the Left” and regularly scores well in popularity polls, was given an overall score of -10 out of 20.

Valls' ministry was judged to have implemented “negative measures that have helped contribute or even increase a climate of racism in France”, the study stated.

The Interior Ministry’s poor grade was put down to its controversial policy towards the Roma people, which has seen the routine dismantling of illegal camps and deportation of thousands of Roma families since the Socialist government came to power last May.

The ministry’s policy of cracking down on illegal immigrants who have no right to stay in France has also contributed to its poor rating.

According to the study, 24,000 people were deported from France in 2006 under Nicolas Sarkozy’s centre-right UMP government, compared to 36,822 in 2012, the year the Socialist Party was elected to power.

For Louis-Georges Tin, the president of the rights group CRAN (Representative Council of Black Associations) which helped put together the report, the Socialist government has a lot to answer for.

“François Hollande has betrayed the people who elected him,” Tin told The Local.

“The socialists criticized the previous right wing government for their policies but they have only continued them or increased them. The Interior Minister Manuel Valls has expelled more people than previous interior ministers,” he said.

While Valls and the Interior Ministry prop up the table, in the relegation zone just above him is the country’s Prime Minister Jean-Marc Ayrault, who scored a poor -6 out of 10.

Ayrault’s poor rating was partly due to the fact he had failed to stick to his pre-election pledge to introduce voting rights for foreigners in local elections.

Sitting pretty at the top of the table, however, was the minister of Youth and Sports, Valérie Fourneyron, who was judged to have done the most “to battle racism and discrimination” with a score of 13 out of 20.

Republic and Diversity say the aim of the study is not to point the blame at France's ministries but to highlight good practice, with training plans to help civil servants become more aware of discrimination and areas where improvement is needed.