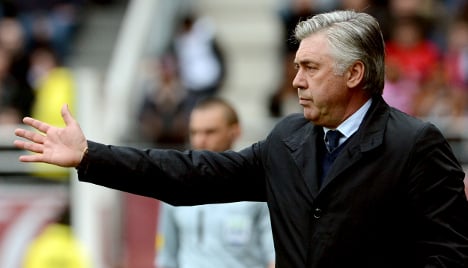 The 53-year-old Italian – who has been at PSG since January 2012 – also denied he had held talks with other clubs such as Spanish giants Real Madrid.

Ancelotti – a Champions League winner both as player and then coach with AC Milan – has been allowed to spend freely by the clubs' Qatari owners.

Apart from taking them to within sight of their first Ligue 1 title since the 1993/94 season they also reached the Champions League quarter-finals – where they were narrowly beaten by Barcelona – and the French Cup quarter-finals, beaten by Evian on penalties, this season.

"I will take my decision after having spoken with the club when the title has been won," he told reporters Saturday.

"However, we have not spoken yet about the matter. We have time. It is not true that I told the club that I want to leave PSG."

Ancelotti was reported by Le Parisien to have told PSG president Nasser Al-Khelaifi on Wednesday of his desire to leave while sports daily L'Equipe claimed he was very close to signing terms with Real Madrid, who look certain to dispense with the services of Jose Mourinho at the end of the season.

"The press has talked about Real Madrid and other clubs, but I haven't spoken to anyone at another team," he said. "That is because I want to be transparent with the club for whom I work."

"It is a choice I alone must make, and it is not an easy one, but I am calm about it, serene even. I have a contract, therefore my hands are tied, as I have to take into account I am contracted till June 2014."

"I spoke to the players yesterday  (Friday) because of all the rumours, but there is no hard news. I already told them before: I want to finish the championship as agreed with the club and we will speak afterwards so we can come to a decision."

PSG are presently nine points clear of Marseille with five matches remaining and are away at their French Cup conquerors Evian on Sunday.