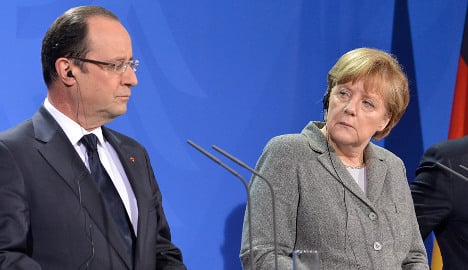 In a document on Europe released on Friday, Hollande's Socialist Party pilloried Merkel for what they said was a "selfish" insistence on austerity as the solution to Europe's three-year-old debt crisis.

The document also accused conservative Merkel, who faces elections on September 22nd, of being obsessed with "Berlin's trade balance and her electoral future".

While also championing measures to boost the eurozone's ailing economy and create jobs, Merkel has stressed the importance of first slashing debt and implementing structural reforms.

Hollande came to power a year ago vowing to reverse this course and place the focus squarely on breathing life back into the 17-nation zone but critics say he has failed to stand up to Merkel, Europe's paymaster and political powerhouse.

The French president, at a new low in the polls after a torrid few weeks domestically, has called for a "friendly tension" with Merkel but other urged him to go further.

"For me, it should be just tension and confrontation if that's what it takes," said Claude Bartolone, the president of France's lower house of parliament, in an interview with the Le Monde daily on Thursday.

And the Socialists' attack has re-encouraged those who believe a focus on austerity is holding Europe back in tackling the crisis.

Martin Schulz, president of the European Parliament, who hails from Germany's opposition Social Democrats, said: "On a national level, we have gone much too far with austerity policies."

"The argument that investor confidence will return with the reduction of public deficits is undoubtedly false," he told Belgian daily L'Echo.

Belgian Prime Minister Elio Di Rupo echoed the thought, telling the La Libre Belgique daily that things had "evolved" and it was time to change course.

"Listen to the IMF, the OECD … what do they say? That the policies of austerity have to stop, the eurozone being the worst off in the world in terms of (economic) recovery," added Di Rupo.

European Commission President Jose Manual Barroso said earlier in the week a "new narrative" was needed that could "unite citizens and come up with a new vision."

But Berlin appeared to be standing firm, with the finance ministry insisting Europe "stay the course" on repairing public finances.

Sources close to Hollande said that "one cannot flip the tables in one go" and that "subtle" changes were needed to "re-orient" the debate.

But the Socialists' undiplomatic broadside at Merkel and her economic policy will do little to improve ties between France and Germany, seen as the driving force behind European integration.

He added that political forces in Germany were "worried about the risk of seeing France tempted by an anti-German policy."

Political scientist Thomas Klau, from the European Council on Foreign Relations, said "mutual incomprehension" had broken out between the parties governing the two key powers.

"There is a growing irritation in Paris over what is seen as a refusal (in Berlin) to see the extreme economic, social and political emergency faced by the countries in the south of the eurozone," Klau told AFP.

Conversely, in Berlin, "there is the impression that the political majority in France hasn't realised how urgent it is to tackle economic and structural reforms," added the expert.

Others said the tension must stop. Michel Barnier, France's representative on the European Commission and a member of the centre-right UMP party opposition, judged the attacks "non-sensical."

"No end to Europe's crisis possible without constructive cooperation between France (and) Germany," he wrote on microblogging site Twitter.

"Let's look at what is working in Germany rather than criticise it," he urged.