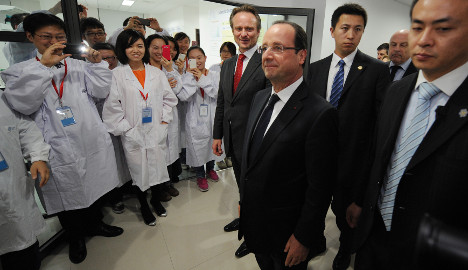 France runs a €26 billion ($34 billion) trade deficit with China and Hollande said Beijing "responded perfectly to the requests that we made".

On the second and final day of his visit, his first to China, Hollande met Premier Li Keqiang.

"China is not looking for a trade surplus but wants to import more French goods," Li said, according to a source close to the delegations.

France accounts for just 1.3 percent of China's foreign trade compared with around five percent for Germany but Hollande said the food industry and urban development could help diversify cooperation from its traditional aviation and nuclear sectors.

Jean-Pierre Raffarin, a former prime minister travelling with Hollande, said the visit had been very useful and would contribute to narrowing France's trade deficit with China.

On Thursday, the first day of Hollande's visit, the two sides announced a lucrative deal for 60 Airbus planes.

The deal, signed in the presence of Hollande and Xi, was part of the French leader's attempt to press China to help reduce its trade surplus with France.

China's pact with Airbus could be worth at least $7.7 billion at list prices, although customers generally negotiate discounts from plane manufacturers.

The French president later vowed to remove obstacles to Chinese investment in France as he vies to drum up anaemic rates of growth in the eurozone's number-two economy.

Hollande told a press conference Thursday that during his talks with Chinese leaders he also raised the issue of Tibet and human rights, with all topics discussed in a "frank and respectful manner".

He said such discussions were not the only purpose of his trip, and that they wanted to talk about political partnership, the Chinese presence in Europe and economic growth.

On Friday, Hollande highlighted the importance of cooperation between the two countries on a range of issues.

"We are, like China, aware that we must fight against global warming."

A French source said that both countries' finance ministers would begin to hold regular dialogue, which would provide a forum for discussing sensitive issues such as the view — shared by Paris — that China's yuan is undervalued.

Hollande had lunch with Xi on Friday with their respective partners, Valerie Trierweiler and Peng Liyuan — both women credited with bringing glamour to their career-politician other halves.

Both Hollande and Trierweiler described the lunch as "friendly".

Twice-divorced former journalist Trierweiler made waves in France by winning Hollande away from the mother of his four children while Peng, a popular soprano who carries the rank of general, was until recent years far better known than Xi.

Speaking to students in Shanghai, Hollande said stronger ties between the European Union and China were essential to both sides.