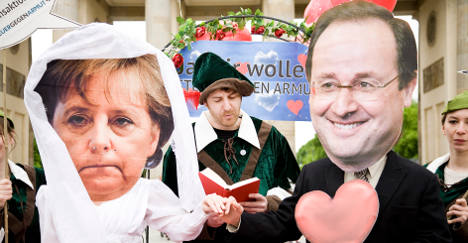 "We've rarely seen relations so bad" between France and Germany, said Fillon, who is now an opposition conservative deputy, on a visit to Berlin.

The comments marked a rare public shot across the bows at Socialist President Francois Hollande by a French official while abroad.

"My fear is that after the German election the situation will harden considerably," referring to the September 22 poll in which conservative Chancellor Angela Merkel is seeking a third term.

"For the moment everyone is in a holding pattern, including the markets, and once the issue of the election is resolved, we will be faced with reality, meaning 'Are we respecting the stability pact? Are we making an effort on competitiveness?'" Fillon said.

Fillon, who met with German officials including Finance Minister Wolfgang Schaeuble, said that his interlocutors in Berlin had expressed concerns about the state of relations, the health of the French economy and the risk of rising anti-German sentiment in France.

"You have… a French president who is waiting for the fall of Ms Merkel, telling himself that there is a small chance after the German elections of getting a quite significant change in the economic orientation of Germany and Europe," he said.

"I think this is a grave error," he said, adding "everything is in the process of growing apart between France and Germany".

Fillon served under former president Nicolas Sarkozy, who famously had such a close working relationship with Merkel that they won the joint moniker "Merkozy".

The ex-prime minister asserted that Hollande had never forgiven Merkel for backing Sarkozy during the French presidential election campaign last year, poisoning relations between them.

Hollande campaigned on a pledge to combat what he called Merkel's austerity-driven approach to the eurozone crisis, favouring a model of increased public spending to spur economic growth.

Merkel has resisted such calls, saying that only expansion based on budgetary discipline will be sustainable.