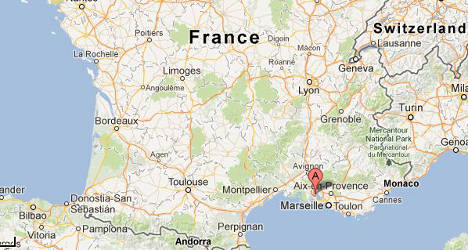 A gunman opened fire with a Kalashnikov rifle in the southern French town of Istres on Thursday killing three people.

A 55-year-old woman was also left slightly injured after a bullet grazed her ear and police found a Kalashnikov automatic rifle in a ditch near the scene in the small town near Marseille, police sources said.

"Everything points to him having dumped it there after the shooting," one said, adding that the suspect was known to police for hoarding military weapons and had a history of psychiatric problems.

One of the victims, a man thought to be in his sixties, was shot dead at the wheel of his car, the other two were male pedestrians, both local men aged 35 and 45 respectively.

A witness to the incident described how the 19-year-old suspect had walked around with his rifle poised "as if he was out hunting" and might easily have killed more people.

"When a car drove up to him, he raised his rifle and pointed it at the driver. Luckily there was no one on the roundabout ahead and the driver did not stop. That saved his life."

The shooter was arrested not far from the scene at a roundabout on the road towards Romaniquette beach, near the city of Marseilles.

According to early reports in the French media the gunman opened fire at around 2pm in the middle of a busy street for reasons that are still unclear. He apparently aimed his weapon at people standing outside their homes.

Some reports in the French media suggest he had a history of mental illness but RTL radio station reported the man had claimed to belong to terrorist organisation Al Qaeda.

French President François Hollande, currently on a trade boosting mission to China, was immediately told of the killings.

He asked Interior Minister Manuel Valls to head to Istres.

"It seems as if this person has opened fire with a very powerful weapon, a Kalashnikov," Valls said.

"It is clearly very worrying. It once again raises the problem of the number of weapons in circulation."

The local Prefect of Police, Jean-Paul Bonnetain, said the killings had apparently been of a random nature.

"Nothing at this stage has enabled us to establish a link between the shooter and his victims."