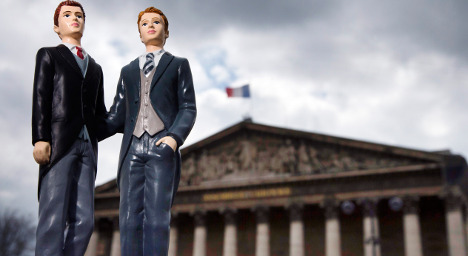 “The G-Day” – a high-end salon dedicated to gay men – is set to open in Paris on Saturday, just four days after deputies in France’s lower house, the National Assembly finally voted to legalize gay marriage.

“Are you a couple? Do you want to get married, or are you simply curious to know what could be on offer, and haven’t had the chance to think about it yet? Then G-Day was made for you,” says the boutique’s website.

The ‘haut de gamme’ shop will be located in the capital’s wealthy 1st Arrondissement, close to the Louvre museum, and its opening on Saturday promises to be a “100% male day" where potential customers can browse through "everything they’ll need for a successful wedding.”

“There will be about 40 totally gay-friendly exhibitors there, and we’ve even had to turn away new ones, for lack of space,” event organizer Claire Jollain told French daily Le Parisien.

“The G-Day” is not the only new business concept to be set up in anticipation of gay marriage in France, however.

Back in February, The Local reported that two enterprising businessmen had set up the website “Divorce-Gay.fr” to cater to the needs of gay couples whose dream ends in heartbreak.

The website features an inventory of French lawyers chosen for their particular ability to cater to gay men and lesbians seeking advice about divorce. In a statement, the creators of the new gay-friendly directory explained the rationale behind the move.

"As gays and lesbians gain new rights and freedoms, this also creates new complications and difficulties – legal, financial, and to do with inheritance – that up to now only heterosexuals experienced," they said.