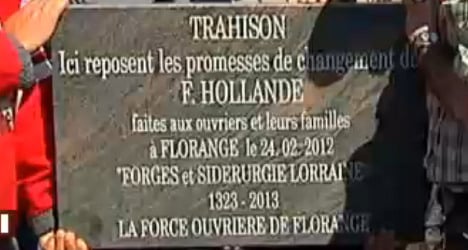 A symbolic gravestone for "the promises of change" of French President François Hollande, displayed by workers at the stricken Florange plant on April 24th. Photo: LCI/Screengrab

As gas lines to blast furnaces at a small-town plant are gradually cut off on Wednesday, it marks not just the end of an era, but for many workers, a "broken promise" by French President François Hollande.

The ArcelorMittal-owned Florange plant, in the heart of the northeastern Lorraine region, has become a symbol for the dismantlement of France's industrial sector, from which 750,000 jobs have disappeared over the past decade.

Despite a feisty protectionist stance by France's minister for industrial renewal, and his own campaign pledges to preserve jobs at plants like Florange, Hollande finally buckled under the costs of reviving it, agreeing to mothball the loss-making furnaces through a deal that would prevent lay-offs.

As of Wednesday, the gas joining the four furnaces will be turned off in a process that will take 48 hours, and 206 of the 629 staff working on them will retire. The remaining workers will be repositioned. In all, the site currently employs around 2,500 workers.

"That means it won't be possible to restart the blast furnaces anymore, unless investments are made in new facilities," CGT union spokesman Francois Lopera said.

When the neighbouring Gandrange furnaces were closed in 2009, unions placed a monument to symbolize the broken promises made by the conservative former French President Nicolas Sarkozy.

Now, the FO union has laid a new gravestone, this time "in honour of Francois Hollande's broken promises," French media reported on Wednesday.

The marble table reads "Treason: Here lie the promises of change of F. Hollande, made to workers and their families on 24-02-12."

In the runup to the Florange deal, French authorities briefly threatened to nationalize the site, but backed away from those plans and instead left the fate of the furnaces tied to a decision on an EU carbon capture project.

Under the November agreement struck with ArcelorMittal, the world's top steelmaker committed to invest at least €180 million in the plant, allowing for part of it to continue making finished steel products for another five years.

It also said it would look into the EU-funded "green steel" ULCOS project.

But once the papers were signed, ArcelorMittal said it was pulling out of the ULCOS project due to technical difficulties.

On Monday, it announced plans to plug €32 million into a France-based research project on how to reduce emissions in steelmaking, the applications of that research will only be known in six years from now – 12 months after the entire Florange plant  has been closed.