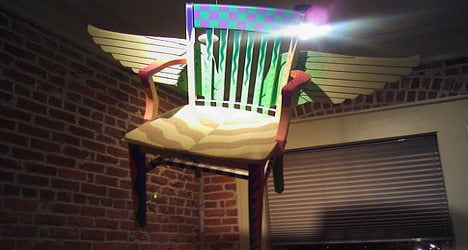 When it comes to paranormal activities, a freaked out French family living in a supposed haunted house in the French village of Mentque-Nortbécourt, Nord-Pas-de-Calais, claim to have seen it all.

They’ve witnessed oranges floating across the room, violent attacks by soap trays and earlier this month members of the spooked family were hospitalized after being hit by flying chairs, the regional Voix du Nord newspaper reported on Wednesday.

According to the local newspaper the family have reported that the strange happenings have been going on since last July. To prove they were not going mad they have brought in others from the village, including the mayor, to witness the events.

“It’s becoming dangerous,” the mother told France 3 television. “My friend had to go to hospital this week after getting hit in the head by stones. It’s serious.”

Paramedics were called earlier this month after one member of the family said he was hit by a flying chair in his face and a soap tray on the back.

The local diocese has sent in an exorcist to try to banish any troublemaking evil spirits that may reside in the home, local television reported.

The ghostly goings-on have become so bad that the family have pleaded with authorities to move them to a new home.

According to the Voix du Nord, the family were first given temporary lodging in a campsite, but now have no fixed accommodation. The local council in the Nord-Pas-de-Calais region have told the father they are taking care of their case.

The strange happenings in Mentque-Nortbécourt have grabbed the attention of the media in France, with TF1 television asking whether it’s a case of “paranormal phenomenon or a just a village joke”.

Although numerous people have lived at the home in recent years, it seems none of them reported any flying chairs.