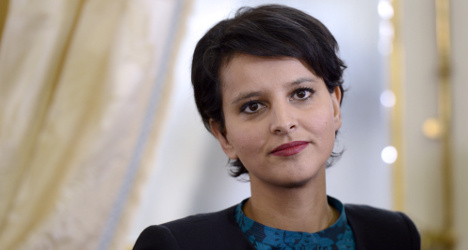 History will be made in the French parliament on Tuesday when deputies finally approve a bill to legalize same-sex marriage as well as open up adoption to gay couples in France.

The vote comes amid daily street protests across the country, some of which have turned violent in recent weeks, and a day after the head of France's lower house of parliament, the National Assembly, was sent a letter containing gunpowder demanding he delay the final vote.

The bill will only become law when it is signed by President François Hollande and published in the Official Journal, but despite the threat of opposition parties delaying that step by challenging the measure through France's constitutional council, the Socialist government has vowed to complete the job.

In an interview with The Local, on what will be a historic day for gay rights campaigners and members of the gay community, government spokeswoman and Minister for Women’s Rights Najat Vallaud-Balkacem said opponents cannot stop France becoming what would be the 14th country to legalize gay marriage.

'It's a question of values'

"This is a hugely significant reform towards equality. We respect the right to protest but we’re very committed to this gay marriage bill and we will see it through to the end,” said the minister.

Polls in France suggest a slight majority of people remain in favour of gay marriage, but the country is clearly divided, with protests against the bill drawing hundreds of thousands on to the streets for some of the biggest demos in recent memory.

Despite the division in the country, Vallaud-Belkacem says gay marriage will represent “social progress” for the whole of France.

“It's a question of values. This bill is important for French society, firstly in order to address inequality of access to the rights of couples, due to sexual orientation,” she said.

“For many years now, we’ve seen that family set-ups have evolved in our society, and that some of them are less protected than others.

“This legislation, then, brings forth a fundamental principle of equality: whatever kind of family a child is born into, they must be protected by the law.”

Supporters are planning a celebratory rally and opponents will stage protests in Paris and across the country. But that is unlikely to be the end of what has been one of the most divisive debates in France's recent history.

The opposition, led by the 'Manif pour Tous' (Demo for All) movement, and backed by the centre-right UMP party, along with other more extreme groups, shows no sign of giving up the fight, which has in recent weeks turned ugly.

Not only have there been scuffles with riot police at street protests, but away from the demos there have been homophobic beatings of gay people in Paris and Nice that have been blamed on the vitriolic atmosphere created by opponents of the bill.

“The violence is unacceptable and I condemn it in the strongest terms,” said Vallaud-Belkacem.

“In recent weeks we have seen a radicalization of some opponents of the bill. However, I will not confuse the peaceful protesters with those more extreme opponents, who do not hesitate to resort to violence – whether it's aggression towards elected officials, death threats or homophobic insults,” the minister added.

As the debate in France has grown more vociferous, rights groups claim the number of homophobic incidents in the country has risen sharply.

'The rise in homophobia is alarming for the whole country'

According to the minister, since the start of the year, [gay rights group] “SOS Homophobie” has received three times the usual number of calls.

“These figures should not only be alarming to us, the government, but also to the whole of society,” Vallaud-Belkacem said.

One of the gripes opponents of the bill have with the minister and her colleagues is that they are not listening to their complaints.

The government has ignored calls for a referendum and even brought forward Tuesday's Assembly vote in a bid to put the bill to bed as soon as possible.

The move infuriated the opposition, who accuse Vallaud-Belkacem’s government of being undemocratic. It’s a slur that she refuses to accept.

“It was part of François Hollande’s election manifesto, so we’re not really taking the French people by surprise with it,” she said.

With gay marriage laws being adopted in Great Britain and New Zealand without much of a fuss in recent weeks, the acrimonious nature of the debate in France, as well as some of the outrageous rhetoric used by opponents, has left many outside observers scratching their heads.

However, Vallaud-Belkacem insists the image of the country abroad has not been tarnished by the recent row.

“France’s image is that of a society which exalts the values of equality and solidarity. And we have had 200 years in which we’ve shown that these values are also a cornerstone of our economic competitiveness,” she said.