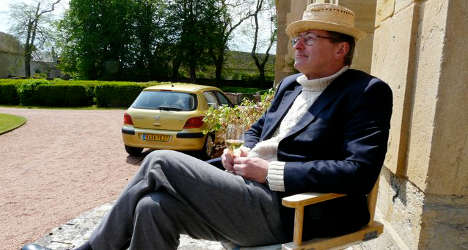 Christopher Chantrey, 63, has lived and worked in France since 1973. He had held various roles working for both French and foreign companies but since 1994 has worked as a freelance consultant in international communications.

First of all how did you end up in France?

I had studied languages at university and wanted to carry on using them rather than being stuck in England doing a job that did not have an international element to it. So I found a company who were looking for someone to work in France.

How is it working in France now compared to when you first came?

France is much better organized now than it was. It was just pottering on at its own pace doing its own thing. It used to take France a long time to learn about business as it’s a country that likes to learn at its own pace. But there have been enormous changes since then. The French still tend to prefer their own when it comes to jobs but the advantage Anglos have of coming to France these days is their language, which opens the door to many jobs.

What exactly do you do now?

I work as a freelance consultant in international communications, which means I give advice to companies on how they should communicate with their target group outside their country.

What are the advantages of working as a freelancer in France?

The advantage is I don’t have to consult with a French boss before I give advice to my clients. I can tell them what I want. I can plan my own use of time which gives me much more freedom, for example, if I need to be at home at a certain time or when it comes to taking holidays. Although with holidays it can also be a disadvantage as I tend to still work whilst away.

The worst thing, especially when starting out, is having to pay up front for your contribution to the French social security system. They seem to make amounts up from thin air, so you really need to have a good turnover. They do have the auto-entrepreneur system for self-employed which is a more sensible way of doing things because your social security payments depend on what you earn, but there is also a limit on your salary.

What would you advise someone thinking of going freelance in France?

I would warn against coming here and expecting to work as a freelancer straight away. You need to be here for a while and see not just what you could do but also what people are prepared to pay for. I think it’s risky just to come here cold with nothing but an idea. If you get a job here you will have the time to see the different options while you are working. Being sent to work in France by your company is the best way in but it’s not always an option for everyone.

You just have to make sure there is a market for what you want to do. It has to be able to work. Renovating people’s homes might work but being a professional party organizer might not.

What about the bureaucracy that comes with being a freelancer?

The bureaucracy is actually not too bad, the main problem is having to pay out for things. It is possible to do your own accounts if you are organized enough. A good suggestion would be to pay to join what’s known as an association agréée to have your accounts independently audited. You have to pay about 100 euros, depending on the company, but it gets the tax people off your back. And the major advantage of it is that if you do it, then you will pay less income tax.

What should people be aware of with the working culture in France?

There’s not necessarily the same familiarity between colleagues. It tends to be more formal here so there’s less chit chat at the coffee machine. People should be aware of that because they could end up thinking their French colleagues are uppity or they’ll be liable to commit some kind of faux pas when it's just a more formal environment.