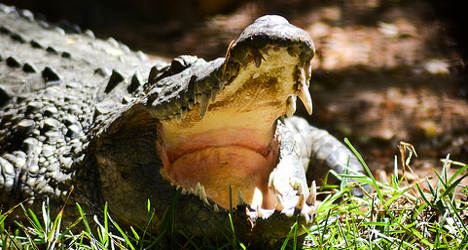 A French deckhand Monday admitted he was lucky to be alive after escaping with bite wounds when a crocodile latched onto his head in northern Australia.

Yoann Galeran, 29, had swum out from shore to retrieve a moored dinghy after dark at Nhulunbuy on Sunday when the two-metre (6.5 feet) saltwater croc attacked, grabbing him by the head and rolling him in the water.

"I just feel that I've been lucky and I just think if it was a bigger crocodile, I maybe wouldn't have any head," he told ABC radio.

"I was swimming, and maybe four or five metres from the boat, I just feel like rocks hitting on my head and something strong and I just realise (it was) a croc," he added.

"I just had the feeling that if I want to fight for my life, I just need to move all my body as much as I can.

"He just hit me on the top, on the left side, and on top of my neck and tried to push me down in the water. I punched him anywhere."

After fighting off the beast, he managed to scramble to safety aboard the dinghy and make it to shore where he was rushed to a nearby hospital for treatment to bite marks to his head, neck and shoulders.

A Northern Territory police spokeswoman said: "So very lucky that he managed to swim away. It could have been a lot more dire, the outcome."

Saltwater crocodiles, which can grow up to seven metres long and weigh more than a tonne, are a common feature of Australia's tropical north.

They have been protected since the 1970s and their numbers have increased steadily since, along with the number of human encounters.

Galeran said children often played in the area where he was attacked and urged authorities to capture the crocodile.

"I think they need to do something with him, probably kill him," he said.