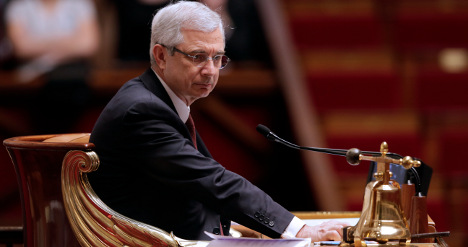 The one-page letter, signed by “an intermediary of law enforcement,” warns Bartolone that “our methods are more radical and more swift than protests”, according to French magazine L’Express.

The document concludes with the statement “You wanted war, and you’ve got it.”

L'Express reports that the signature, "Interaction des forces de l'ordre", is the same one used in a letter sent in March to a judge currently investigating former French President Nicolas Sarkozy. Bullets were enclosed with the letter in that case.

The package received by Bartolone on Monday will now form part of the same anti-terrorism investigation looking into the threat sent to Judge Jean-Michel Gentil.

"Allowing marriage for all would be the same as destroying all marriage," the letter says, before making the chilling threat: "If you were to carry on regardless, your political family will have to suffer physically."

Last week, Socialist deputies Sylviane Bulteau and Hugues Fourage were sent letters from anti-gay marriage extremists, threatening to kidnap and kill them or their loved ones, if the gay marriage bill is not withdrawn.

Earlier this month, Senator Esther Benbassa said her car was trashed – a move she believed was linked to her support for the bill – and that she had received threatening phone calls, emails and letters.

Erwann Binet, a Socialist MP who supports the bill, has been forced to cancel planned debates for security reasons after being heckled by far-right militants, who have taken a front seat in the current furore over the bill.