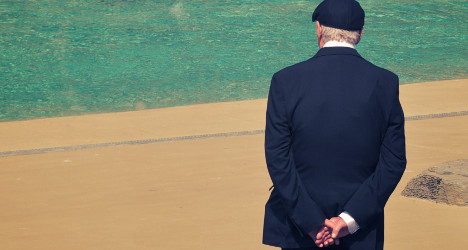 Stricken by loneliness and despair since the death of his wife Simone, six months ago, 90-year-old Roger-Marc Grenier is ready to find love again and he wants everyone to know.

At the bottom of his garden, in the wine-making countryside of Libourne, near Bordeaux, stands an improvised sign, planted in the earth.

“She wouldn’t have to do anything around the house,” Grenier told regional daily Sud-Ouest. “If she likes, she could sleep here. She would have her own bed,” he added.

Grenier, who fought in the French Resistance under General Charles de Gaulle, had known his late wife Simone since they were both 18 years old, but theirs was not the conventional love story.

He was actually married to Simone’s sister for many years, but after their respective spouses passed away, the pair decided – both already advanced in years – to “share their loneliness”, as described by Sud Ouest, and tied the knot five years ago.

“Because I have a bad knee, I used to wake up in the middle of the night sometimes. I would turn on the lamp, and when I saw her move in her sleep, it reassured me,” Grenier confides.

The elderly gentleman, a retired mechanic and truck-driver, has already had interest from several women, but none have worked out.

One carried on “like a Lady of the Manor”, one simply lived too far away, and the other was more interested in making love, than anything else, according to Sud-Ouest.

Now, approaching his 91st birthday, with bladder problems and a Zimmer frame, Grenier admits to being lost in sadness at times, despite weekly visits from a couple of neighbours.

“After the life I’ve led…Loneliness scares me,” he told Sud Ouest.