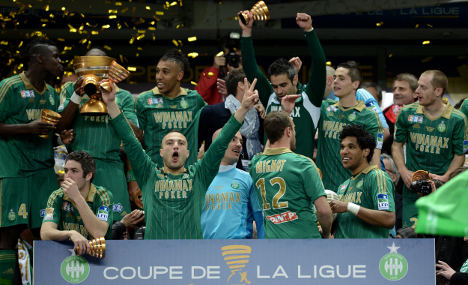 Brazilian striker Brandao scored the only goal in the 18th minute to lift the trophy for a third time after two successful campaigns with former club Marseille.

"Thirty two years is a long time — our first time at the Stade de France and we did it. Brandao was our locomotive but the whole team were fantastic," said coach Christophe Galtier.

"It's a very important win for Saint Etienne. I came here to win trophies and that's what we've done," enthused man of the match Brandao.

'Les Verts' were the biggest club in France for much of the 1970s, famously jousting with Liverpool in the European Cup quarter-finals in 1977.

With Michel Platini in his pomp prior to his move to even greater stardom with Juventus, the side from the industrial east claimed their 10th league crown in 1981.

But the intervening years have brought lean pickings for the club from the industrial heartland of the country until Saturday's success.

Worse still for Saint Etienne fans, recent years have been spent very much in the shadow of near neighbours Lyon, who won seven league titles in a row between 202 and 2008.

Brandao, who won a 2010 league title while at Marseille, was on the mark as Saint Etienne took an early grip on proceedings with an opportunistic goal and thereafter the team didn't look back.

Saint Etienne then suffered a setback as Mevlut Erding had to leave the field on 24 minutes through injury, to be replaced by Cheick Diarra.

But they nearly went two goals to the good when from an Aubameyang cross this time from the right flank Costil did well to save a Brandao header.

Julien Feret did attempt a riposte for Rennes but his low freekick was blocked on the line by Saint Etienne keeper Stephane Ruffier.

Rennes, seeking to snap a silverware drought of their own stretching back to a French Cup win in 1971, did threaten to get back on terms in the 86th minute but Ruffier saved well from Sadio Diallo.

The loss was a third in the final for Rennes coach Frederic Antonetti, a former Saint Etienne coach, who tasted defeat with Bastia in 1995 and also with Nice in 2006.