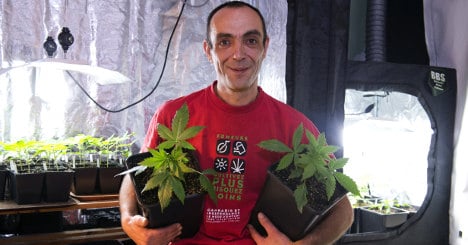 Dominique Broc is one of the founders of the cannabis social clubs, a movement that encourages members to grow the herb for their own use and avoid illegal dealers.

The 44-year-old gardener said he would appeal his conviction, which came after police visited his home in western France and found 126 plants and 26 grammes of cannabis.

"I'm not surprised by this," Broc said. "We are planning to appeal and we will take it to the European Court of Human Rights if we have to."

Broc's lawyer, Philippe Baron, unsuccessfully attempted to persuade the court that his client's conduct amounted to a legitimate act of civil disobedience.

The campaigner is due back in court on May 2nd, over his failure to respond to a judicial order to disband his federation of cannabis social clubs, which he registered with local authorities in March.

Other branches of the movement quickly followed that lead and have been subjected to similar dissolution procedures.

Broc was given a six-month suspended sentence and a €2,000 fine for the cannabis-related offences, to which the judge added two months and €500 for his refusal to provide a DNA sample.

OPINION: 'Cannabis clubs are the solution, not the problem.'

By coincidence, customs officials on Thursday released figures which offered an indication of the scale of the cannabis trade in France.

Officers at Paris Orly airport said they had seized 165 kg of resin last year – equivalent to the total amount seized in the previous five years.

The increase was said to be linked to increased consignments being sent from Morocco via Orly to the French Caribbean islands of Guadeloupe and Martinique as part of a trade in which cocaine goes in the other direction.

Supporters of decriminalization have also pointed out that turf wars linked to the illegal trade in cannabis are a major factor in gun crime across the country and particularly in Marseille, where they have been blamed for a wave of murders in the last 18 months.

Farid Ghehioueche from the European Coalition for Just and Effective Drug Policies, told The Local on Friday that he had spoken to Broc since his sentencing.

"He's in good spirits. He was expecting this, but he is ready now to take this case all the way to the European Court of Human Rights," he said.

Ghehioueche was uncertain over what Thursday's ruling would mean for cannabis users in France. "On the one hand, Dominique has actually been given a relatively short sentence, compared to what the text of the law calls for. However, the court also warned him that on his next 'provocation', he will be sent to jail," said Ghehioueche.