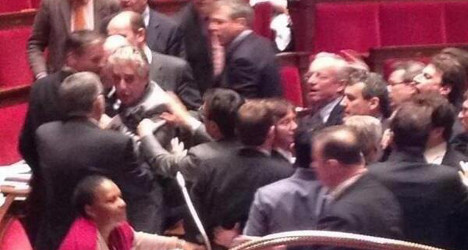 A final, decisive vote on the bill – which would also legalize adoption by gay couples – is expected to take place on Tuesday, prompting opponents to up the ante, with protests taking place every day in Paris and other cities.

The tensions on the streets were mirrored in France's lower house – where the bill was being debated a second time – with scuffles breaking out among rival politicians and reports of punches being thrown.

In the early hours of Friday, as debate raged on, members of parliament belonging to the right-wing opposition UMP party rushed down to the government benches in response to what they said was provocation by aides of the justice minister.

Shouting "out", "out", the stand-off lasted several minutes, with reports that a court bailiff was punched. One minister said it was unprecedented in his 30 years in the lower house.

"I've been sitting in this chamber for 30 years, and I've never seen anything like this," socialist deputy Alain Vidalies was quoted as saying by French television TF1, in the aftermath of the scuffles.

Meanwhile, opponents continued to protest on Thursday in Paris and other cities in France, although the demonstrations were calmer than they had been on Wednesday, when journalists were attacked and cars vandalized.

But news of a fresh attack on a gay bar emerged, with the manager and client of an establishment in the south-western city of Bordeaux assaulted overnight on Wednesday by two people who also smashed bottles and glasses.

The attack happened on the same night as a similar incident in the northern city of Lille, where three employees of a gay bar were injured in an attack by four men who smashed the building's windows.