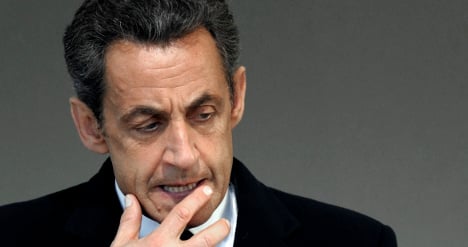 Judicial sources confirmed on Friday that a formal probe has been opened that could lead to Sarkozy facing a second set of corruption-related charges arising from his campaign.

Sarkozy, 58, was charged last month with taking advantage of a person incapacitated by illness in a case that centres on allegations he accepted envelopes stuffed with cash from France's richest woman, Liliane Bettencourt.

He adamantly denies any wrongdoing and is suing investigative news website Mediapart over the Libya allegations. Mediapart reported last April that Kadhafi's regime had contributed €50 million to Sarkozy's successful 2007 campaign.

Ziad Takieddine, a Franco-Lebanese businessman who is embroiled in a series of political financing scandals in France, has also repeatedly claimed that he has proof Sarkozy was financed by the Libyans but has refused to make his evidence public.

Kadhafi's regime was toppled and he himself was killed in 2011 following an uprising backed by a NATO intervention that Sarkozy was instrumental in organizing.

That won him international acclaim but his reputation has been blighted since leaving office last year by a slew of judicial probes into his conduct during his time as president or as a government minister.

As well as the Libya and Bettencourt cases, he is the subject of ongoing investigations into alleged cronyism in the awarding of contracts for opinion polls, an illegal police investigation into journalists and alleged kickbacks on a Pakistani arms deal.

Sarkozy lost his immunity from prosecution after losing the 2012 presidential election to Francois Hollande.

In March he was placed under formal investigation on suspicion of taking advantage of Bettencourt to secure up to four million euros in financing for his 2007 campaign.

L'Oreal heiress Bettencourt has suffered from dementia since 2006.

Under French law, being placed under formal investigation is the equivalent of being charged in other legal systems, but does not mean the case will necessarily end in a trial.

If convicted in the Bettencourt case, Sarkozy faces up to three years in jail, a fine of €375,000, and a five-year ban from public office which would destroy any hope he entertains of making a political comeback.

French judges demonstrated their readiness to go after former leaders with their successful pursuit of Sarkozy's predecessor as president, Jacques Chirac. He was convicted in 2011 on corruption charges related to his time as mayor of Paris.

Chirac, who was excused from attending his trial because of ill health, was given a two-year suspended prison term.

Since losing to Hollande, Sarkozy has concentrated on making money on the international conference circuit, but he has repeatedly hinted that he is considering another tilt at the presidency in 2017.

In March, he told magazine "Valeurs actuelles" that his sense of duty to his country could see him return to the political arena.

"There will unfortunately come a time when the question will no longer be 'Do you want to?' but 'Do you have any choice?'."

Married to former supermodel Carla Bruni, Sarkozy remains popular with voters on the right of the political spectrum but he is regarded as a divisive figure by centrist swing voters who tend to decide elections in France.