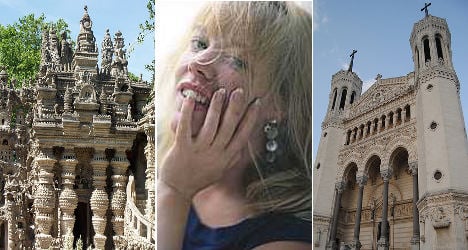 I came here 25 years ago to learn French and get a sun tan and never went home.

I was living in Montpellier but moved to Lyon so my daughter could go to the Cité Scolaire International, which is a state school but allows pupils to do a bilingual baccalaureate.

Tell us more about Lyon.

It’s a wealthy city, very bourgeois. It’s a great city if you have money and it’s hard not to get a job here. At the weekend many locals go to their posh country houses out of town. Its location is one of the best things about Lyon. In a couple of hours, you can be in Italy, Marseille or Paris. There’s also an easyJet hub here with flights to all over Europe.

Does it deserve its title as the culinary capital of France?

Sort of. There are a whole bunch of fabulously expensive restaurants (many outside the centre) which I'm sure are divine but I've never eaten at those kind of prices (100 euros a menu type thing). But the cheap restaurants here are mostly awful.

Traditional Lyon food is heavy on the animal fat, the offal, the pigs' feet, and quenelles (slimey dumplings) and main flavours are salt and garlic. Also, service tends to be sloppy, slow and unfriendly and kitchens like to close at 10pm sharp. There are a few chains open until midnight, but absolutely nothing afterwards. Sunday nights most restaurants are closed.

Where are the best places to hang out in Lyon?

I would go to the Café de la Rep, just off Rue de la Republique because it’s French, it has the football on and they sell fantastic salads until midnight. It’s relaxed and it has a great atmosphere. The place that I like to keep a secret is a bar called Look Bar on Rue Palais de la Justice. The owners have had it for about 50 years and it has not changed. They still play The Doors on vinyl and they sell killer cocktails. Just don’t go there on Friday or Saturday because it becomes overrun by students.

Where is the best place to go for a day trip?

You have to go to the Palais Ideal de Facteur Cheval near the town of Hautieres. Forget the Eiffel Tower or Cannes, this is the must-see place in France. It was built by a postman out of the stones he collected whilst doing his rounds over 40 years. At first people here just thought he was a nutter until people from abroad began saying how extraordinary he was.

The other place is Annecy. It’s a 12th century mini Venice. Why would you not want to go there? It’s stunning.

Where do you tend to avoid in Lyon?

Lyon sounds overrun with students. Is it a good place to study?

There are a huge number of students here. But it depends where they are from. The Spanish ones will party anywhere, in the middle of a cabbage patch if they have to. But I think some of the British ones get bored here. It doesn’t have the clubs or the shops for those from big British cities.

Have you integrated into French life in Lyon?

Yeah, I think so. I speak fluent French and I have French nationality. I have a lot of French friends but I will always be a Londoner.

Samantha David's first novel "I Married a Pirate" was published in 2009. She has just finished her second novel "Blanche in Love" and is currently working on "In the Dog House".