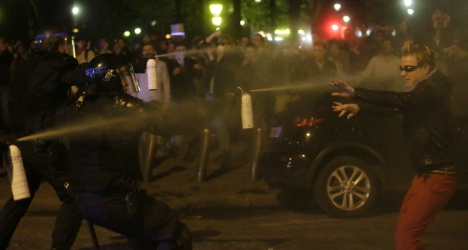 French President Francois Hollande on Thursday hit out at "homophobic" acts by opponents of a same-sex marriage bill after violent protests that included an overnight attack on a gay bar.

With the bill close to final approval, opposition by religious groups, conservatives and the far-right has intensified, with demonstrations increasingly turning violent.

"Homophobic acts, violent acts have been committed. The right to protest is recognised by our constitution and accepted by the French. But no protest must degenerate," Hollande said.

The president's comments come after French Prime Minister Jean-Marc Ayrault called for calm as the National Assembly prepared to give its final approval to a bill legalising same-sex marriage and adoption.

The lower house National Assembly began its second reading of the bill late on Wednesday and was to give its final approval on April 23, under a fast-track measure that limited debate to 25 hours.

Opposition to the bill has failed to die down, despite it being approved by the Senate last week, with critics vowing mass protests to derail the proposition.

Several thousand opponents to the bill crammed the streets of Paris on Wednesday, waving banners that read "A father, a mother, it's basic" or criticised French President Francois Hollande.

Interior Minister Manuel Valls condemned acts of violence during the protests "in spite of promises made by the organisers".

Several people were detained for questioning after cars and public property were damaged and police officers and journalists attacked, said Valls. Police put the number of detentions at 11.

According to 40-year-old lawyer Philippe, "the necessary attention has not been given to such an important bill".

"A referendum at least would be a big step forward", agreed Etienne, a 19-year-old student who said he was joining as many of the protests as he could.

Organisers put the number of demonstrators at 8,000 while police said 2,400 people had protested. Twenty-four people who took part in a counter-protest denouncing homophobia were arrested, police said.

The day before, some 2,700 opponents had gathered in Versailles outside the capital to protest the bill, leading to scuffles with police.

Opponents have vowed new mass demonstrations in the next week.

"These protests have a right to take place, we are in a republic. But calls for violence, calls to hate, must be condemned," Ayrault told journalists, urging right-wing politicians to "call for calm" among supporters.

The bill has proved hugely controversial in a country that is officially secular but predominantly Catholic, mobilising hundreds of thousands of people for months in pro- and anti-gay marriage protests nationwide, some violent.

A mass protest in Paris is also planned for May 26 if the law is approved, to demand its withdrawal and a referendum on gay marriage.

Introducing the bill for its second reading, Justice Minister Christiane Taubira decried "spouters of hatred" who had violently opposed it.

"This bill takes nothing away from them – there is more than one way to live as a couple or as a family," she told the assembly.

Meanwhile in the northern city of Lille, three employees of a gay bar were insulted and injured late Wednesday in an attack by four men who smashed its windows. The bar's owner linked the incident to "tensions" surrounding the parliament vote.

"I was hit by a chair," thrown through the window, he told AFP.

Meanwhile, debate in the lower house turned sour as pro- and anti-bill politicians traded barbs, with Justice Minister Christiane Taubira likening the situation to "a bad Spaghetti Western", while one member of parliament said the proposed law equated to "killing children".

"What you are doing is (opening) a breach that will not close if this legal text passes through, it's an ignominy," said Philippe Cochet, a UMP member.

"You are killing children", he added, provoking an uproar that forced the speaker of the house to interrupt the session.

When the members of parliament returned, Cochet said the term he used was "not appropriate", but added that he still believed the bill would make children more vulnerable.