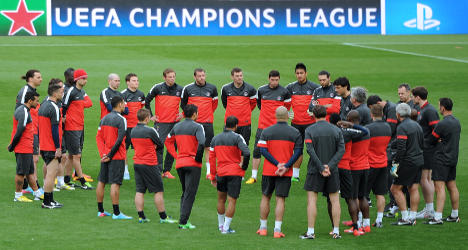 Paris Saint-Germain's hopes of a domestic double this season ended on Wednesday as Ligue 1 minnows Evian eliminated them 4-1 on penalties after their quarter-final ended 1-1 after extra-time.

PSG – who were knocked out of the Champions League last week by Barcelona – had taken the lead through Javier Pastore in the eighth minute.

However, Tunisian international Saber Khlifa nipped in behind a static David Beckham two minutes from  half-time to level.

Neither side could gain the upper hand in the second-half and extra-time was only memorable for the straight red card for Thiago Motta for a foul on Cedric Barbosa two minutes from the final whistle.

Barbosa was to have the last laugh as he whacked home his spot kick to seal the Ligue 1 strugglers a place in the last four and end PSG's hopes of a ninth
Cup trophy.

Evian coach Pascal Dupraz excused his side to those who wanted the glamour club to win.

"We have eliminated PSG and we are sorry," he said tongue firmly in cheek.

"But we also wanted to go to the Stade de France! We said when the quarter-final draw was made that the best thing that could happen to us was to draw PSG.

"We hope now that this win will also give us the confidence to retain our Ligue 1 status (Evian are fifth from bottom three points above the relegation places)and get to the final.

"That wouldn't be too bad either would it!"

Earlier Bordeaux had to come from behind against Ligue 2 side Lens to win 3-2 and book their place in the semi-finals.

Bordeaux had Malian forward Cheick Diabate to thank as a double from him propelled them into their first appearance in the last four of the competition since 2003.

On Tuesday, Ligue 1 outsiders Lorient and Troyes had progressed to the semi-finals.

Jeremie Aliadiere's stoppage-time strike took Lorient through as they beat League Cup finalists Saint-Etienne 2-1 away which gives them a chance of winning the Cup for only the second time in their history.

They could gain quick compensation, however, should they beat Rennes in Saturday's League Cup final encounter at the Stade de France.

In a meeting of two clubs in the Ligue 1 relegation zone, Troyes beat Nancy 3-0, with Jeremie Brechet, Julien Faussurier and Fabien Camus all scoring in the second half.