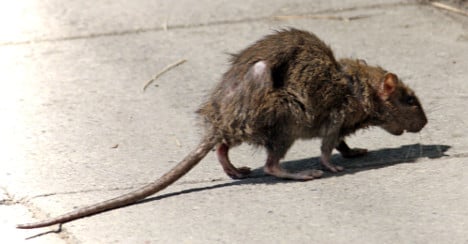 It’s that time of year again. Spring is in the air, temperatures are climbing, and for one group of Paris residents, that means it’s time to emerge from their holes after a long winter underground, and venture out into the open air.

That’s right – the annual rat re-infestation of Paris is underway, which means its time for the Paris police to officially kick off their annual "deratization" campaign.

The UPNA – unité de prévention des nuisances animales (animal pollution prevention unit) – of the Paris prefecture of police, which was founded back in 2000, started its yearly war against rodent pests on Monday, and will fight on until June 14th, according to the prefecture’s website.

It is estimated that there are millions of rats scurrying about in the dark underground passages of the City of Light, though it’s impossible to give an accurate number.

“Legend has it there are two rats for every person living in Paris,” Jean-Michel Derrin, who heads the pest-control police unit, told French daily Le Parisien on Wednesday.

Official statistics aside, rat infestation is a serious problem in this city of over 2 million (human) residents.

The animals leave excrement behind them, cause damage to infrastructure and furniture if they get access to a dwelling, and according to BFMTV, each year they infect hundreds of Parisians with leptospirosis – a serious disease with extremely unpleasant symptoms such as vomiting, diarrhea and even liver failure.

“Rats are everywhere – I don’t even let my kids play outside anymore,” one resident of the city’s 18th arrondissement told Le Parisien.

The designated rodent squad consists of six inspectors who will respond to calls about an infestation, ask property-owners to take certain measures – cleaning out basements or boarding up cellar windows, for example – and then call in an exterminator to ‘evict’ the rodents.

City authorities evidently take the rat problem seriously enough to issue verbal warnings and €450 fines to anyone who fails to comply with the unit’s instructions.