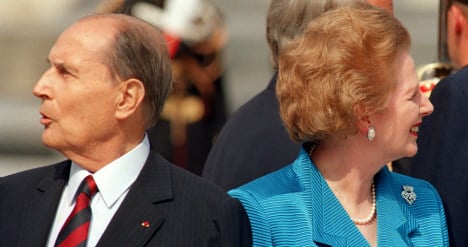 Then British Prime Minister Margaret Thatcher, looking away from then French President François Mitterand in Paris in 1989. Photo: Joel Robine/AFP

It is not just Britain that is divided over Margaret Thatcher.

On the day the death of the former Tory Prime Minister was announced last week, reaction in France was divided between hearty tributes, veiled acknowledgment of her achievements and angry condemnation.

Since then, France too has been debating the merits of Thatcher's economic liberalism.

Last week The Local featured the opinion of economics professor Tomasz Michalski from HEC business school in Paris, who argued France needs to free up its labour market, increase product market competition and cut public spending to help the economy.

On Wednesday, as Thatcher is laid to rest in Britain, we hear from elements on the left who tell us why France, with its values of égalité and fraternité, must resist those Thatcherite economic policies at all costs.

“Since she deregulated the financial sector it has been completely out of control, with bankers doing whatever they want. It led to the crisis in 2008 and to what we see happening in Cyprus right now.

“We need control because banks have no common sense, they do not regulate themselves, which is precisely what this government is trying to do.

“Look at the divide between rich and poor in Britain, which is now greater than before Thatcher. In France we still have a welfare system which brings solidarity and equality to society.

“Unions are weaker in France than they were in Britain at the time of Thatcher but I believe in discussion and finding compromises when it comes to labour disputes. She just broke everything.

“We don’t want to see France go that way. We need to preserve the solidarity between the social system and the people.

“Equality is probably the strongest value in the French Republic and she did not stand for that.

“I don’t know what we would do if some county invaded some remote islands belonging to France, maybe we would follow her example on that.”

“Here in France we place a higher value on our social services, transport system, support for the unemployed and so on, than in Thatcher’s Britain.

“She cared little for that and that’s why we could never agree with those policies here. If you travel to Britain you see misery everywhere because of her.

“If you look at the banks and the financial sector then okay, people who work there are better off, but nothing else is. The working class and the public services have been destroyed. All her policies went against poor people.

“In France we don’t want that. We resisted the financial crisis better than the UK, exactly because we still had good public services, good transport system and good welfare benefits for the unemployed.

“It’s not flexibility of the labour market that advances a country – it brings nothing to the workers. We have excellent workers here in France. As a country France produces more because the people feel good in their work.

“Economic liberalism has no respect for the family or for the people. Closing a factory down and forcing people to work 200km away because the labour market is flexible is not respecting the people.”

“It's not possible just to copy and paste economic policies onto another country, which has its own culture, history and system.

“You can't impose this model on France; it would have devastating effects on our public services. You can look at the issue of the health service in Britain, where people often have to wait months for an operation. Some of them end up coming to France to be operated on here. We can't copy that model here in France.

“In education in France, we have a culture of equality – not competition. We have seen in recent years a new culture of comparing schools on their students' results, with league tables and so on, like in Britain.

“This has the effect of pitting schools against each other to try to improve standards by looking at figures rather than the quality of teaching. But this does not work. Many reports have been published that denounce this method.

“There is a necessity to reduce the deficit in France, but education is not a variable. We saw this type of policy under Nicolas Sarkozy, when thousands of jobs were lost in education and classes were closed across the country. This was a terrible experience for patients.

“It doesn't mean there are no savings to be made in education, but the education budget must be protected. The most important thing is to protect equality.”