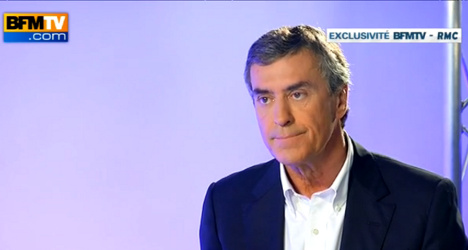 A screengrab from former French budget minister Jérôme Cahuzac's interview on April 16th, where he announced his intent to retire from parliament. Photo; BFMTV

In a much hyped interview with BFMTV on Tuesday France's disgraced former budget minister, who was this month charged with tax fraud, said he would be quitting parliament, and would probably not go back into politics.

Jérôme Cahuzac was charged with tax fraud after admitting to hiding €600,000 in a foreign bank account, prompting a scandal that has seen the shaken Socialist government battle to try and restore confidence.

"I have decided to resign from this mandate," he said in a televised interview on BFMTV on Tuesday, referring to the lower house seat that he held before becoming budget minister after François Hollande was elected president last year.

"The seriousness of this moral mistake means I cannot stay on as member of parliament," he said.

The ex-minister's appearance on TV may have pulled in the viewers but it did not impress members of the French government. France's PM Jean-Marc Ayrault described it as "pathetic".

Ayrault told France Inter radio on Wednesday that he was "shocked" by Cahuzac's "excercise in communications".

The PM reaffirmed that the government and President François Hollande knew nothing about Cahuzac's secret Swiss account.

"If we had received any information he would have left the government immediately," Cahuzac said.

Under French law, a minister that leaves the government – by resigning or due to a reshuffle – can get his seat back in the lower house within one month. Cahuzac had until Friday to make his decision.

In the interview – his first televised appearance since the scandal erupted on April 2nd – Cahuzac also said he thought it was "extremely improbable" that he would return to politics.

He acknowledged once again that he held €600,000 in his foreign bank account, but denied media reports that he had tried to invest €15 million in a Swiss fund.

"I made a foolish mistake, a crazy error more than twenty years ago," said the former minister. "Do not ask me why we commit foolish mistakes. By definition, madness and stupidity is difficult to explain. But anyway, I had a dark side and the dark side is now in full light."

The existence of Cahuzac's secret bank account was revealed in December by news website Mediapart, but for months he vociferously denied the allegations to the president, media and to parliament – even after resigning in March.

Then on April 2nd, Cahuzac – who as budget minister was in charge of fighting tax evasion – finally confessed to investigators probing the allegations.

His shock revelation rattled Hollande and his administration, and the government has since scrambled to contain the scandal, announcing a series of measures aimed at ensuring better transparency among politicians.

On Monday, all 38 ministers in Hollande's cabinet were ordered to publicly disclose their personal wealth – a first in France – and the government will attempt to have the disclosure rule extended to parliamentarians in a bill to be introduced on April 24th.

The government has also announced plans to fight tax evasion.