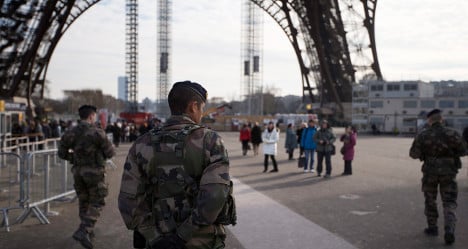 French soldiers on patrol around the Eiffel Tower in Paris. Photo: Joel Saget/AFP

Interior Minister Manuel Valls has asked local officials and the security forces "to reinforce without delay the presence of patrols" across the country, a statement from the ministry said.

People are "asked to be vigilant as far as suspicious parcels or abandoned luggage are concerned … without giving in to panic".

Boston police did not immediately say whether the explosions were part of a terrorist attack, but marathon organizers said it was a twin bombing.

France has been under heightened security measures following its military intervention in Mali earlier this year.

Since the alert system was raised to “reinforced red”, measures have been taken to protect public institutions and increase security around major transport hubs such as the capital’s train stations and airports.

France has only ever once raised its security level to the highest level “crimson”, which was during Islamist gunman Mohamed Merah’s shooting spree in March last year.

In a statement, the head of state expressed "his very strong feelings following the explosions that hit the the city of Boston" that left three dead and more than 140 injured.

"In tragic circumstances, the head of state offers his condolences to the families of the victims and expresses France's complete solidarity with the American authorities and people," the statement from the Elysée said.

Fears of further attacks have clearly been heightened especially at airports where no chances are being taken.

A New York bound Air France  flight was delayed at Paris on Tuesday morning after a suspect bag was found on board. The pilot ordered a "decontamination procedure" which involved all passengers getting off the plane so a thorough search could take place. The bag, which proved to be of not danger, had been left on the plane by a passenger from a previous flight.

Paris’s own marathon took place just over one week ago. Organizers told AFP on Tuesday there had been no specific threats to target it.

"I was not informed of any specific threats this year, no more than usual," said organizer Joel Laine.

"The only time where we needed to take action, was in 1991 where, on account of the Gulf War, we had to cancel the race. The organizers are not able to do anything in the face of these type of groups who target sports events."

But Laine said the Boston attack could have an impact on future sporting events, not least the London Marathon which is due to take place next week.

“There will be without doubt a climate of suspicion for a good while surrounding these type of events. I am thinking notably of the London Marathon.

"I am thinking of the anxiety this will instill in the competitors and their families."