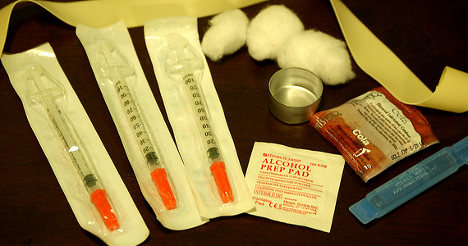 The French government looks likely to face stiff local opposition to their controversial plan for a drug 'safe house' in the 10th arrondissement of Paris, according to a poll of residents on Sunday.

A total of 296 voted against, and only 16 in favour of the proposal in an informal referendum organized by a local councillor from the opposition UMP party, in a café next to the Gare du Nord train station, close to where the drug safe house is rumoured to open for a trial period.

Although the government has yet to decide on the location, it has been widely reported that the centre is likely to open near the Gare du Nord, a notorious drug-trafficking hub.

In February, Prime Minister Jean-Marc Ayrault's office confirmed that the safe zone would open on an experimental basis and would be managed by the "Inter-ministerial mission for the fight against drugs and drug addiction" (Mildt) in conjunction with the Ministry of Health.

Within the safe zone, drug addicts would be able to consume drugs in a hygienic environment, under the supervision of health workers.

French daily Le Parisien reports that Sunday's voters included UMP sympathizers and activists who have already openly expressed their opposition to the project.

“It’s a great success,” Serge Federbusch, the local UMP councillor who set up the unofficial poll, was quoted as saying by Le Parisien.

For his part, Rémy Féraud, socialist mayor of the French capital's 10th arrondissement, has assured opponents that police presence would be increased in the area once the safe house opens.

But he has yet to convince many local residents who complain that the safe house would create an “additional security risk”.

Hélène, a 27-year-old mother who recently moved to the area told Le Parisien she feared the safe house would “legalize drug consumption and attract a dangerous crowd of drug addicts.”

“We already have Roms (Romany gypsies), tramps and druggies that come to get their methadone,” another resident told the paper.

“Drug addiction is a public health problem. It should be dealt with in hospital – there are two in the area – and not in a shop,” said local resident Philippe.

Read more about local reactions to drug safe houses in our gallery here.