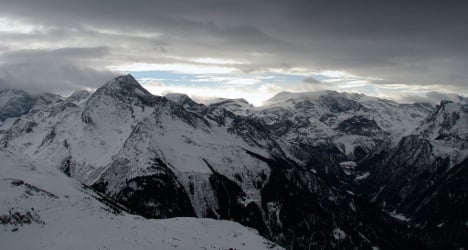 Three of the skiers died while being guided up a mountain in Vanoise, Savoie. Photo: *pascal*

A 60-year-old man died on Saturday in the Haut-Alpes region.

The three others – part of a group of five Frenchmen being guided up the Vanoise Mountain – died on Sunday in the Savoie region. Their companion and their guide survived and were hospitalized.

A rescue police commander, David Petitjean, said the avalanche on Sunday happened in the morning so probably was not the result of the sun warming the surface snow.

But authorities in the Alps said there was a "strong" risk of avalanches in the wider area because of generally warmer weather.

A total of 32 people died during France's 2012-2013 ski season, according to the National Association for Snow and Avalanche Research.

These deaths come a month after a "dark week" in the Alps region which saw ten deaths in just eight days leading to a call for "prudence" by local police.

The string of deaths in early March  included two skiers in a party of three in the Queyras range of the Hautes-Alps who were swept away when a slab of snow broke off as they were skiing off-piste at an altitude of 2,800m. The man, aged 75 and a woman in her fifties were found by rescuers 600metres further down the slope, but could not be revived. A third man, believed to be the woman's partner, survived the avalanche.

In a separate incident that week, a 40-year-old ski and mountain skills instructor for France’s national police died after falling into a crevasse during a training exercise on Mont Blanc.

The day before, a skier at Crévoux in Hautes-Alpes died in a freak accident, after colliding with a 30cm tree stump which severed the femoral artery.

Four skiers were also killed in an avalanche on the ‘Passage to Hell’ section of mountain at Crévoux in Hautes-Alpes, while two were carried off to their deaths by an ice-slide at Tignes earlier in the week.

The recent series of avalanches has been blamed on strong winds at high altitudes, in combination with a return to milder temperatures after heavy snowfall, which risks loosening up snow ridges.

However, the spike in deaths has also been attributed to the increasing popularity of “going off-piste”, whereby skiers venture beyond groomed, monitored slopes in search of a more isolated and thrilling experience.