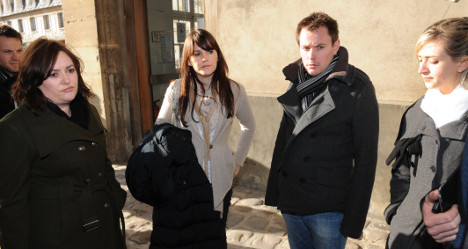 O'Keefe's body was found rolled up in a sleeping bag in a parking lot in the Paris suburb of Les Mureaux on January 2, 2001 –  three days after a series of events left her alone and without a bed for the night on New Year's Eve.

Araujo Da Silva insisted that he was innocent throughout the appeal hearing in the Paris suburb of Nanterre that began Tuesday.

But after only four hours of deliberation the court late Thursday rejected his appeal and upheld the original sentence.

Araujo Da Silva had confessed to the crime twice before retracting his testimony, saying he had been pressured by police.

He admitted to taking the woman home and having an argument with her, but insisted she left unharmed.

O'Keefe's four brothers and sisters, who were civil plaintiffs in the case, were in Paris for the appeal.

"It was extremely stressful to be honest, the whole time since Jeanette passed, but now I think today it lets us have some closure, and for our parents to have some closure," her sister Denise, 43, told AFP after the verdict.

"We don't know exactly what happened to Jeanette but we have a pretty good idea and her killer is going to be locked away for a very long time, so that's what we wanted."

Araujo Da Silva said he had met O'Keefe on the Champs Elysees in Paris on New Year's Eve and taken her to his home in Les Mureaux, where her body was found three days later.

French investigators found male DNA under the victim's fingernails, but it was eight years before they found a match, when Araujo Da Silva's genetic profile was entered into a database after he was arrested for petty theft.

He confessed to the killing when detained by police, saying he had beaten O'Keefe and strangled her to death when she refused to have sex with him a second time and threatened to call police.

An autopsy found she had been struck by at least 13 blows before being strangled to death.

Araujo Da Silva told the court on Tuesday that he had only confessed under pressure from police, who had said he would receive a lighter sentence if he admitted to the crime.

"I was tricked and manipulated during questioning," he said.