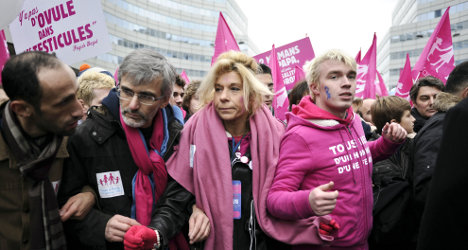 French comic Frigide Barjot, leader of the Manif pour tous (Demo for all), France's mainstream anti-gay marriage movement, reacted angrily on Friday after the French government announced it would bring forward to next Wednesday the National Assembly's final hearing on a bill which would legalize gay marriage in France.

The government's move came after the French Senate approved the gay marriage bill earlier in the day.

The decision to bring the Assembly's second hearing  forward to Wednesday has however rendered pointless the mass protest against gay marriage, which had been scheduled for May 26th.

"This is a disgrace. The French people don't want this law, and what do they do? They speed up its passage. Hollande wants blood, and he will get it," Barjot was quoted as saying by France's TF1, adding "We live in a dictatorship. The President of the Republic has guillotined us."

Centre-right UMP deputy Christian Jacob joined the fray, saying in a statement that by accelerating the bill's now almost certain passage into law, "the President of the Republic is risking a violent confrontation with the French people."

On Monday, gay rights activists criticized the anti-gay marriage movement's rhetoric for what it claimed was a recent rise in homophobic incidents. The rancourous debate followed the savage beating of two gay men on Saturday evening in Paris.

Friday's violent and angry language marks only the latest installment in what has for many months been a divisive, and often ugly public debate in France about the issue of gay marriage.