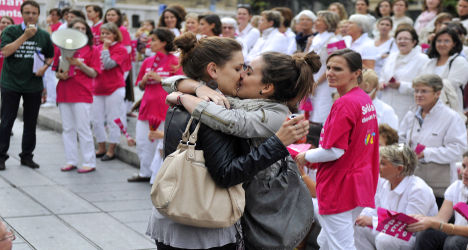 France's upper house Senate voted Friday to adopt a law granting homosexual couples the right to marry and adopt children, which has sparked widespread opposition and protests from conservatives and religious groups.

The vote, by a show of hands, followed days of intense debate. The bill must still technically face a second reading in the lower house National Assembly, but lawmakers there already adopted it in a first reading on February 12.

But opponents slammed the adoption of the bill, with right-wing former prime minister Jean-Pierre Raffarin saying it would cause a "rupture" in society.

The vote took place amid a backdrop of continued protests by several groups opposed to allowing gay couples in France to get married.

Militants from hardline Catholic organisation Civitas and the more mainstream anti-gay marriage movement Manif pour Tous lined up in the streets outside the Senate on Friday to show their opposition to the bill.

Supporters of the bill also showed their presence outside the Senate on Friday.

Despite the vote opposition groups refuse to give up the fight and have announced another mass protest will take place in Paris at the end of May.

The passing of the gay marriage bill appeared a formality after senators voted to adopt the key article for legalising same sex marriage earlier this week.

The article was adopted by a majority of 179 to 157, following 10 hours of debate on the floor of the Senate. Five senators from the centre-right opposition UMP defected from their party and voted in favour of the article.

"The vote on this article marks a victory in the fight against homophobia, and for tolerance and democracy,” said François Rebsamen, head of the Socialist group in the Senate, in a statement after the vote on Tuesday.

France's highest court the Constitutional Council, which has the power to reject legislation if it is against France's constitution, has already said it would accept what the legislature decides.

The Senate vote comes as a survey published by BFMTV on April 4th found 53% of the French people are in favour of legalizing gay marriage, but 56% are opposed to same-sex adoption.

President Francois Hollande championed same-sex marriage and adoption during his election campaign last year, and his support for the legislation did not waver throughout the turmoil.

His girlfriend, Valerie Trierweiler, has revealed that the president will be attending the marriages of gay friends once the legislation is on the statute books.