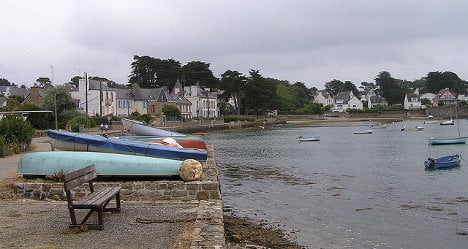 Fire fighters were once again called into action in the besieged village of Larmor-Baden in Morbihan this week.

They have been kept busy in recent months as a serial arsonist has struck at will, burning down properties in the village of only 800 people.

Police attempts to catch the fire starter, including special night patrols and the unprecedented step of carrying DNA tests on 400 men, have so far led to nothing.

The latest blaze occurred on Wednesday evening around 10pm in a house that had recently been renovated and turned into a second home.

The series of arson attacks began back in December 2011 when three unoccupied homes were burnt down. A building next to the Post Office was also hit as well as the home of a local priest.

The arsonist has also destroyed holiday homes and a brasserie in recent months, among other targets, but so far the fires have not led to any fatalities.

Police are still working on the theory the arsonist is a male resident of the village.

In February public prosecutor Thierry Phelippeau announced that DNA tests would be carried out on all men in the village to see if they could match it with a DNA sample found in one of the burnt out buildings.

“We feel the culprit is getting bolder in his choice of targets and I’m afraid that if these fires start up again, there will be a real risk to lives,” said Phelippeau at the time.

However, he said, “in the case of a refusal, that person will be of interest to investigators.”

With only around 10 people left to be tested only one person has refused to hand over a DNA sample.

A 39-year-old teacher, who has a home in the village, refused on the grounds it would be a breach of his “private life”.

The prosecutor said police would now start looking at other lines of inquiry.